My husband recommended this book to me. It's about both distance running--a new obsession of his--and writing--my own obsession and vocation. As such it's something of a meditation on the focus and perseverance it takes to finish a marathon (or a novel) and then keep doing it again and again, and it's also a book about finding a way to keep pursuing such grueling and challenging passions as one ages--something of increasing interest to me now that I'm having to acknowledge that whether I like it or not, I am getting to be middle-aged, and I have to listen to my body's limits.

89) A Fighting Chance by Elizabeth Warren


So, I read this book. To say what I thought of it would be to get more political than I like to do on my author blog, especially because I wouldn't be able to resist talking about the 2016 election...so let's just not go there.

This is one of Bujold's earliest works, and probably her least-known book. I've had sitting on my TBR shelf for ages but just never quite got around to reading it, because no one was telling me, "OMG you must read this!" the way they did with the Vorkosigan Saga or her more recent fantasy novels.

While it's not her best work--she's definitely an author whose work improved over time--I'm very glad I read it. My favorite kind of fantasy reads like historical fiction, but with a few twists to keep it from being tethered to what actually happened, whether it's something like Naomi Novik where it's our world, but with dragons, or more like Jacqueline Carey or Guy Gavriel Kay where the map is the same but the names are changed. This is the first time--the story is set in a recognizable Renaissance Italy, only one with magic, in its more benign forms sanctioned by the Catholic church and society as a whole. But of course magic isn't always benign...

Definitely an enjoyable read, and one with a nice romantic subplot for its young protagonists.
Posted by Susanna Fraser at 8:46 PM No comments:

85) Six Amendments: How and Why We Should Change the Constitution by John Paul Stevens

Wherein retired Supreme Court Justice Stevens reviews what's broken in the American political system from his unique judicial perspective and proposes some constitutional remedies--e.g. undoing Citizens United, classing the death penalty as cruel and unusual punishment, and finding a way to limit gerrymandering. While I don't disagree with any of his ideas, I found the book dry going at times. And, I sadly doubt there are enough people with the power and will to make a difference who'll listen to him.

I started this book a time or two as a child but never got through it. It had nothing to do with racehorses, after all, unlike my favorite Henrys, King of the Wind and Black Gold. Now I want to go back and re-read those books with an adult's eyes, because this isn't just a horse book--it's a book about dedicating yourself to an art and a craft, to creating beauty for its own sake, to perseverance, to keeping alive your culture's best traditions.

87) The Regency Underworld by Donald A. Low

A readable introduction to crime and punishment in Regency England, with a heavy focus on London.
Posted by Susanna Fraser at 6:00 AM No comments:

Random Cookbook of the Week: Old-Fashioned Bread Omelet from More With Less

After a somewhat crazy summer with writing and editing deadlines, I'm starting to settle into a more normal schedule again...which means I have time again to challenge myself to cook a new recipe from a randomly selected cookbook from the 64 (yes, 64!) currently on my bookshelf.

This week I drew the More With Less Cookbook, one I also cooked from on my previous version of this challenge. That time it was winter, so I made a nice hearty lentil-sausage soup--which wasn't venturing far out of my comfort zone, since this cookbook is my go-to source for lentil dishes.

But this time I tried something I've never attempted before: an omelet. (I know, I know. I developed a taste for eggs relatively late in life, so I'm just now developing my cooking techniques for them.)

Heat in skillet:
- 1 T margarine (I used butter because it tastes better AND is healthier)

Pour in egg mixture and cook over medium heat without stirring, about five minutes. When browned underneath, place pan in oven for 10 minutes to finish cooking on top. Turn out onto hot platter, folding omelet in half.

Note that this assumes you have an oven-safe frying pan. If all of yours have plastic handles, this recipe will be right out for you. We have a nice set of stainless steel, picked up at a bargain because it had been the store's display set, which I love for having a sort of double robustness--you can cook almost anything in them AND throw them in the dishwasher. Way too many quality pots and pans aren't dishwasher safe, IMHO. Just because I'm something of a foodie doesn't mean I have all the time in the world at my disposal, nor that I enjoy the cleaning up part of the process.

So, anyway, this isn't the prettiest thing I've ever cooked, not by a long shot. It fell apart when I tried to fold it: 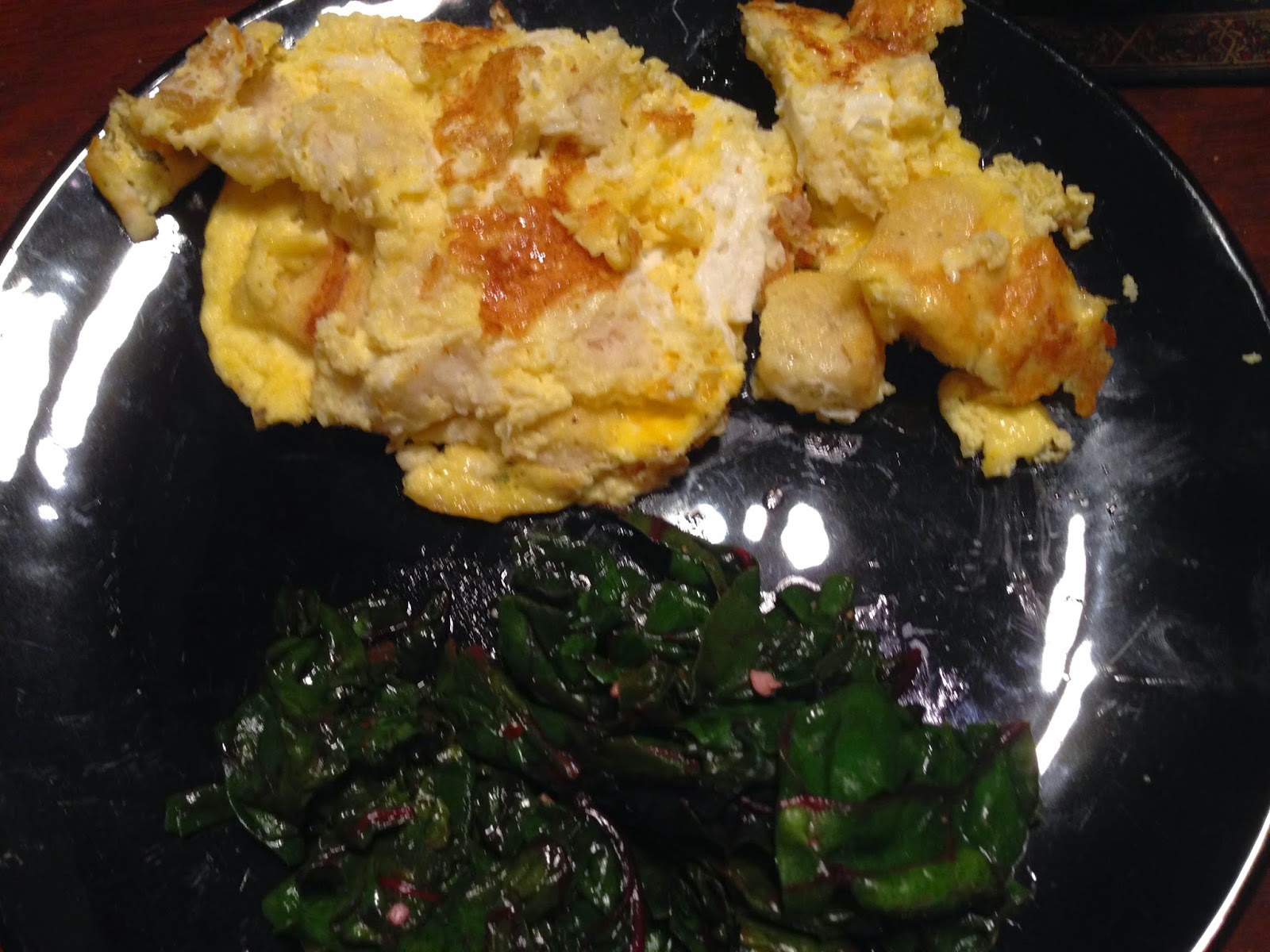 But it was quite amazingly tasty in a comfort-food sort of way. The bread gave it sort of a savory French toast effect. I'm sure you could vary the flavor considerably depending on what type of bread and/or cheese you chose. The cheddar didn't impart a very strong flavor, which was fine by me, but if you like your cheeses cheesy, you'll probably want a sharp cheddar or other strong hard cheese.

I think using good white bread was the right choice. Poor-quality white bread wouldn't have soaked up the egg and milk while still maintaining its breadly integrity the way this did, and a whole wheat, sourdough, rye, or whatever would've overwhelmed the delicate flavor of the eggs. (Sheesh. I sound like a judge on Iron Chef or Chopped.)

You can barely see it in the picture, but I accompanied the omelet with quick-cooked chard flavored with garlic, salt, pepper, and white balsamic vinegar. The combo worked, but really I think just about any bright, strong flavor would pair well with the omelet, not least such traditional breakfast goodies as bacon, ham, and fresh fruit.

I'm sure I'll make this again. It's quick, simple, nutritious, and tasty all at once.
Posted by Susanna Fraser at 6:00 AM 2 comments:

The latest graphic novel showcasing the further adventures of Aang, Katara, Sokka, Toph, and Zuko (though Zuko has so far been absent from this trilogy). Deeply interesting if you're a fan of Avatar and The Legend of Korra, but would undoubtably be baffling if you aren't.

80) Thank You For Your Service by David Finkel

A harrowing, heartbreaking book following several soldiers who served multiple deployments in Iraq as they struggle to reintegrate into society and cope with PTSD, traumatic brain injury, and their impacts on their families and futures. I'm glad I read it, though a big part of me hated it.

81) The Improbable Primate by Clive Finlayson

A quick read, though I wouldn't recommend it if you haven't read anything else on the current state of the science with respect to human evolution since it assumes a certain familiarity with major fossil finds and the various theories about humanity's spread across Africa, Eurasia, and Australia. Finlayson's main focus is on our species' preference for environments combining access to fresh water, some trees and/or rocks/caves, and some open space, and how the most successful early humans were those who developed lighter builds and longer limbs for covering longer distances between water sources. I'm not sure I agree with all his theories, but he raises some interesting points. He takes what I believe is the unusual view of seeing every hominid from Homo erectus on as the same species. I'll admit my gut reaction is, "But we can't be the same species as H. erectus. They had TINY LITTLE BRAINS."

82) The Rise of Rome by Anthony Everitt

A history of Rome from its legendary foundations to the fall of the Republic. I think it would be good for a reader unfamiliar with the history in question (though it would help to have a broad sense of the course of ancient history). I found it a useful refresher on what I learned from listening to the early sections of Mike Duncan's wonderful History of Rome podcast.

83) The Little Girl Who Fought the Great Depression by John F. Kasson

This one is more interesting than I expected, really. It's a blend of celebrity biography and social history of the Depression and Shirley Temple's impact as the biggest child celebrity of the age by far. To me the most interesting chapter was the one about Bill "Bojangles" Robinson and the complex racial issues of his career and his dances with blonde little Shirley.

84) Written in My Own Heart's Blood by Diana Gabaldon

If I had to describe this book in one word, I'd choose "rambly." If you've been following the series, enjoy Gabaldon's voice, and are interested in the doings of the extended and often interwoven Fraser, Mackenzie, and Grey families, you will happily plow through this book (as I did). If not...give the first book a try and see if you want to keep going from there. This is NOT a series you'd want to start in the middle. In some ways I wish these books had more focus...OTOH, there's something to be said for a good chatty ramble through characters' lives.
Posted by Susanna Fraser at 8:26 PM No comments: