Random Cookbook of the Week - More With Less

This week's random cookbook was More With Less, a Mennonite cookbook that was the go-to frugalista recipe source among my Presbyterian church community immediately post-college. I don't cook with it so much anymore. I still love its message, but the flavors NSM. I like my food a bit brighter and spicier, and if I'm going for comfort food, I'm more likely to delve into my own heritage and get Southern. Mm, barbecue...fried chicken...buttermilk biscuits...sweet tea...

(I do have one best-beloved recipe from More With Less, a mild curry called Pakistani Kima. But I rarely make it because Mr. Fraser hates curry. Whenever he goes to a tech conference, the first night he's away I cook kima and then have the leftovers for lunch all week. When I'm at a writers' conference, he does the same thing, but with tuna casserole. The first night part is key, since it gives plenty of time for the curry/canned fish smell to dissipate by the time the curry/canned fish hater gets home.)

But this week Mr. Fraser is at home, and anyway the point is to try new-to-me recipes, so I made:

Brown sausage in large kettle. Remove meat and pour off most of the drippings. (The recipe calls for pouring off all but 1/4 c. of drippings, but I don't think Jimmy Dean makes sausage that fatty anymore.)

Add onions, garlic, and parsnips. Cook 5 minutes or until onions and garlic are tender.

Add remaining ingredients, including browned sausage. Simmer 30 minutes or until tender. Serve with bread. (The recipe suggests placing a bread slice in each bowl and pouring soup over bread, but I decided I'd rather have it on the side.) 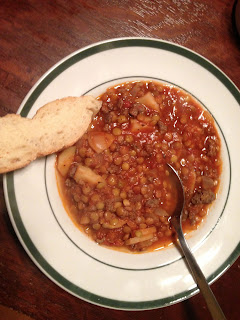 It's...pretty good. Not a "wow" kind of recipe, but hearty and wintry and filling.
Posted by Susanna Fraser at 8:37 PM