I know I've been neglecting my planned weekly recipe and making-me-happy posts--currently the issue is I've caught yet another Doom Cold, one that's had me laid up since last Saturday night.

I am, however, starting to improve, at least enough to sit up at the computer for a few minutes to pass along my recommended reads from March, in the order I read them:

The final entry in Hines's Magic Ex Libris series. If you haven't read any of it yet, you'll want to go back to the beginning and start with Libriomancer. And if you're a fan of the series but hadn't realized this book was out, now you know.

It's hard to say much about a book deep in a series without giving too much away, but the general concept is our contemporary world, but with magic fueled by the shared belief of readers in fictional worlds--i.e. a magic wielder could pull Lucy's healing cordial from the Chronicles of Narnia, the invisibility cloak from the Harry Potter series, and so on. If that sounds intriguing to you, you'll most likely love these books.


The Horse by Wendy Williams

If, like me, you were the kind of kid who read all the Black Stallion books and all your hometown library's Marguerite Henry (my favorites were King of the Wind and Black Gold because RACEHORSES), you'll love this book. Especially if, also like me, you have a lifelong interest in evolutionary biology and like to keep up with its latest developments. Maybe a narrow target market after all? But if you're in it, read this book.

Like Revisionary, I only recommend this book if you've read what's gone before--it's Book 5 in a series about a family from a society of monster hunters gone rogue after they realized that not all, nor even most, of said "monsters" were actually deserving of slaughter. Instead, they're cryptozoologists, who study and protect the cryptids of the world, but with plenty of action fighting their old monster-hunting colleagues and such cryptids as really do pose a threat. The books are funny, playful, fast-paced and exuberantly inventive. If you're a fan of Buffy the Vampire Slayer or Sleepy Hollow (especially in its crazy-good Season 1 incarnation), you need to read these books. Start with Discount Armageddon.

This latest entry returns to Verity, protagonist of the first two books, after spending Books 3 & 4 with her brother Alex, and IMHO it's the strongest story yet.
Posted by Susanna Fraser at 10:02 PM No comments:

I've missed a couple weeks of poking recipes, mostly because I've been feeling a bit guilty about the fact I ended up bailing on my Lenten vegetarianism back in the second half of February when I got sick and never summoning the willpower and the momentum to get back to it. Maybe next Lent? Maybe later this spring or in the summer when there's a greater variety of fresh fruit and vegetables to make meatless eating more fun?

So this week I'm linking to one of my go-to recipes from Cooking Light, Chili-Cheese Mac. It's quick, easy, soothing comfort food with just enough extra spice to keep it from being too bland.


Don't get me wrong, this isn't anything fancy. Unlike the last 2 or 3 recipes I've posted, I wouldn't serve this one for company. But if you're looking for something simple and reasonably nutritious for a weeknight dinner, I recommend it.
Posted by Susanna Fraser at 6:30 AM No comments:

This week I'm going to do it--I'm NOT going to use this post to rave about Sleepy Hollow or Hamilton.

Instead, I'll start by saying the thing that is making me happiest of all this week is that I just heard that a Facebook friend of mine--not a super close friend, but a former coworker--just got her first pathology results following chemo and a mastectomy for breast cancer that was caught at stage 3. They came back NED - No Evidence of Disease. Take that, cancer, you evil beast! You can't kill us all! Not today!

I've started writing original fiction again for the first time in over a year--specifically, the interracial, Alabama-Auburn, just-how-much-can-I-starcross-these-lovers contemporary romance I occasionally bring up on Twitter. I'm just tiptoeing back in, but the characters and voices are starting to come alive for me.

I'm signed up for my first of three planned 5K's this year, on the Saturday of Memorial Day Weekend, and I'm planning to start training for it next week, now that it's going to be Daylight Savings Time and I'll be able to run after work. 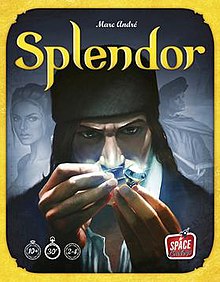 And since I want to share at least one thing that's something my readers can go out and experience for themselves, I'll talk about one of my favorite board games. My husband, you see, has become absolutely obsessed with board and/or card games. Mental challenges! Family togetherness! Entertainment for friends! While I tend to be happier with games like Taboo, Trivial Pursuit, or Cards Against Humanity that focus more on knowledge or wordplay, I'm learning to enjoy--and occasionally even win--some of Mr. Fraser's favorites. And one I'd like to recommend as a perfect combination of easy to learn but varied enough to offer continued challenges is Splendor.

You're a Renaissance gem merchant. Your goal is to out-compete the other merchants by stockpiling gems to earn prestige points, with bonuses in the form of "visits from nobles" that vary from game to game.

So if you and your family or friends enjoy board games, by all means give this one a try. It's also available as an iPad app, one that I find useful for unwinding at the end of an evening.
Posted by Susanna Fraser at 6:30 AM No comments:

If I'm not careful, these posts could turn into a broken record of "Susanna loves Hamilton and Sleepy Hollow." But Sleepy Hollow has really hit its stride, not quite to Season 1 levels of awesomeness but solidly entertaining, ever since it came back from its midseason hiatus. If you've ever been a fan or are thinking of trying it, you should watch to improve its chances of getting renewed for Season 4.

And this song from Hamilton, wherein Hamilton helps Washington prepare his farewell address, has been much on my mind as we move through the election process. (Something which is NOT making me happy. I don't think I've ever been as scared by my own country before. People! Please. Vote courage. Vote compassion. Vote civil liberties. Vote for a generous, open-hearted, open-minded America. History has its eyes on us.)

This particular performance is at the 2015 George Washington Prize Dinner at the Gilder Lehrman Institute, hence the modern suits instead of colonial costumes:


"One Last Time" from the musical Hamilton from The Gilder Lehrman Institute on Vimeo.

And, fanfic being fanfic, because both of these obsessions of mine are rooted in the American Revolution, someone wrote a crossover. (Actually, several someones.) As an added bonus, it's quite well-done: Don't Be Shocked When Your Hist'ry Book Mentions Me. Basically, Crane and Abbie follow a lead that takes them to a crypt under Trinity Church in Manhattan, where they find Hamilton--the real historical one--in a state of suspended animation similar to what allowed Crane himself to come back to life in the 21st century. The newly revived Hamilton steps into modern Manhattan a couple months into the musical's run, leading to this gem of an exchange toward the end of the first installment:


“I scarcely recognize it,” said Hamilton, looking up and down the street at the changed face of the city. Grief settled over his features, once again. “What sort of place could I have, in such a world?”

A bus came to a stop just past them, pulling up to the corner. It had Hamilton’s face plastered over its side, near ten feet tall, with his name in letters half as big.

“What on earth,” Hamilton said, staring.
“Apparently there’s a play? A new one. On Broadway,” said Abbie.
“I want to see it,” Hamilton said immediately.
Abbie pulled out her phone, and after a minute’s tapping her eyebrows went up. “It’s sold out,” she said.
“The next performance, then,” said Hamilton.
“It’s sold out until May,” said Abbie.
“Ha!” said Hamilton. For the first time he looked a little less distressed. “I don’t suppose Madison could sell out a play for so long.”


There! Next week I have to think of something to be happy about other than Sleepy Hollow and Hamilton. Maybe. I hope.
Posted by Susanna Fraser at 6:30 AM No comments:

Another vegetarian recipe for a Lenten Wednesday, this one from Mark Bittman's The Minimalist Cooks at Home: (Slightly adapted because I think the timing works better if you get the sauce mix going while waiting for the pasta water to boil.)

1. Bring a large pot of salted water to a boil. Place the oil, garlic, and red pepper in a large, deep skillet and turn the heat to medium-high.

2. As soon as the garlic begins to brown, sprinkle it with salt and pepper to taste and add 3/4 of the bottle of wine. Bring to a boil and maintain there.

3. When the pasta water begins to boil, add the pasta. When it begins to bend (after less than 5 minutes of cooking), drain and add to the wine mixture. Cook, stirring occasionally, adding wine a little at a time if it threatens to dry out completely.

4. Taste frequently. When the pasta is done, stir in the butter and turn off the heat. When the butter melts, serve immediately, topped with Italian parsley and parmesan cheese if you'd like.
Posted by Susanna Fraser at 6:30 AM No comments: