109) The World of Jennie G. by Elisabeth Ogilvie

A re-read of a childhood favorite that holds up quite well, all things considered. It's the middle book of a trilogy, but it's always been my favorite because it's the one where the protagonists fall in love.

110) Organizing from the Inside Out by Julie Morgenstern

Another re-read, this time of a book I first read in 2010 when we were in the process of buying and moving into our current home. I could tell it had great principles, but Morgenstern advised NOT applying them in the midst of a move, because you need to settle in to your new space a bit to get a feel for how best to organize it. Mind you, I don't think she would've advocated waiting 4+ years, but here we are. I'm thinking of making 2015 the Year of Getting Organized, and maybe even beginning with my office or a closet or two this year. OTOH, next month is NaNoWriMo, then there's Christmas, AND I have books releasing 11/24/14 and 1/5/15...so maybe January is soon enough to start.

111) A.D.: New Orleans After the Deluge by Josh Neufeld

A nonfiction graphic novel (which sounds like nonsense, but calling it a "graphic history" makes it sound like it's a particularly gory history instead of one told largely through illustrations, you know?) following the experiences of several survivors of Hurricane Katrina--both those who evacuated and those who stayed and rode out the storm. A short but intense read, and one that brought the nine-year-old memories of watching the storm from afar vividly back to life.
Posted by Susanna Fraser at 6:13 PM No comments:

106) Rose Under Fire by Elizabeth Wein

I think this book is even better than Code Name Verity, which I read last month. The heroine, Rose, is a an American girl just out of high school who uses family connections (she has an English uncle who's a high-ranking officer) to get a job with the British Air Transport Auxiliary in 1944. After she's captured in France, she's taken to Ravensbruck--in what's probably an unlikely scenario, but one that makes a certain sense given the chaos of the late stages of the war. What follows is a moving story of survival and then bearing witness.

107) City of God: Faith in the Streets by Sara Miles

Sara Miles is one of my favorite Christian writers, not least because she found the Episcopal Church a few years before I did, albeit coming from the opposite direction--she wasn't a believer of any kind, while I was raised Southern Baptist and spent some time as two different flavors of Presbyterian along the way.

While I didn't love this book as much as I did Take This Bread or Jesus Freak, I still found it a very moving account of finding God in the midst of a city (San Francisco) all culminating in a public Ash Wednesday service--after all, in the Bible, Heaven is the city of God, not the floaty cloud-land of popular imagination nor the cross between New Zealand, the Scottish Highlands, and the more spectacular bits of the Pacific Coast I tend to picture.

I got this book from the library after hearing the author interviewed on NPR because it sounded like the kind of practical science-geeky book I enjoy. And it proved to be what I was expecting--an account of how the domestic cat has evolved to live alongside humans, along with biological explanations of their behavior. The only downside is it left me a little wistful, because Mr Fraser is so severely allergic to cats that we can't have one in our household. (And yes, I know there are hairless cats. I just don't think it'd be that satisfying to own a cat without nice soft fur to stroke.)
Posted by Susanna Fraser at 5:36 PM No comments:

My pace of reading has slowed considerably of late because for the past two weeks or so much of my spare time has gone to first watching the TV series Sleepy Hollow in its entirety from the premiere up to this Monday's episode, then reading Sleepy Hollow fanfic and watching the first few episodes again with Miss Fraser. It's an addiction, but a fun one. I should really do a post on how Tom Mison's Ichabod Crane is a perfect historical romance hero (all the charm, gentility, and ability to work boots and a long coat of the past with none of the bigotry and misogyny!), but for now here's some eye candy: 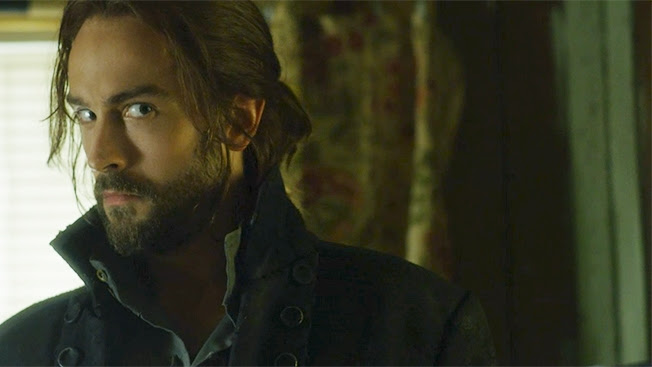 So. I've been behind on my reading. But I haven't stopped, to wit:

103) The Shelf by Phyllis Rose

Another entry in a memoir genre I tend to find enjoyable--author takes on a quirky project, anything from cooking her way through a cookbook to living out a literal interpretation of some sacred text, and writes about her experiences. Rose takes a library shelf--fiction, with a mix of classics, modern literary fiction, and mysteries--and reads her way through it. Along the way she describes her reactions, researches the authors (even meeting two of the living ones), and digresses interestingly about issues ranging from the continued bias against women's writing to how library collections are weeded. Even though my reading tastes and Rose's don't match much beyond Harry Potter and Jane Austen, I still enjoyed her voice. I definitely recommend this for anyone who likes books about books and reading.

The final book in Milan's Turner family series--I'd read the other two brothers' stories, but awhile back, so my memory needed some jogging on their backstories. As is always the case, I enjoyed Milan's strong writing, gift for characterization, and ability to make standard romance tropes entirely her own. I tend to buy her books and hoard them on my Kindle against the point I'll be, say, stuck on an airplane or in a waiting room, because I know I'll get an excellent reading experience.

This book, while engaging, is structured almost like a series of linked short stories, so it was easy to put down after a chapter or two and take up later, at least until the last third or so when the overall narrative picks up pace. The protagonist, Rose, is the "Phantom Prom Date," a girl killed in a car accident on the way to her prom in 1952 who's been a ghost ever since, a ghost of the road who helps travelers when she can--even if it's only easing them into the world of the dead--and who's looking for revenge against...well, the man who killed her, only it's a bit more complex than that and he's not exactly a man.
Posted by Susanna Fraser at 10:36 PM No comments:

Freedom to Love has a cover! 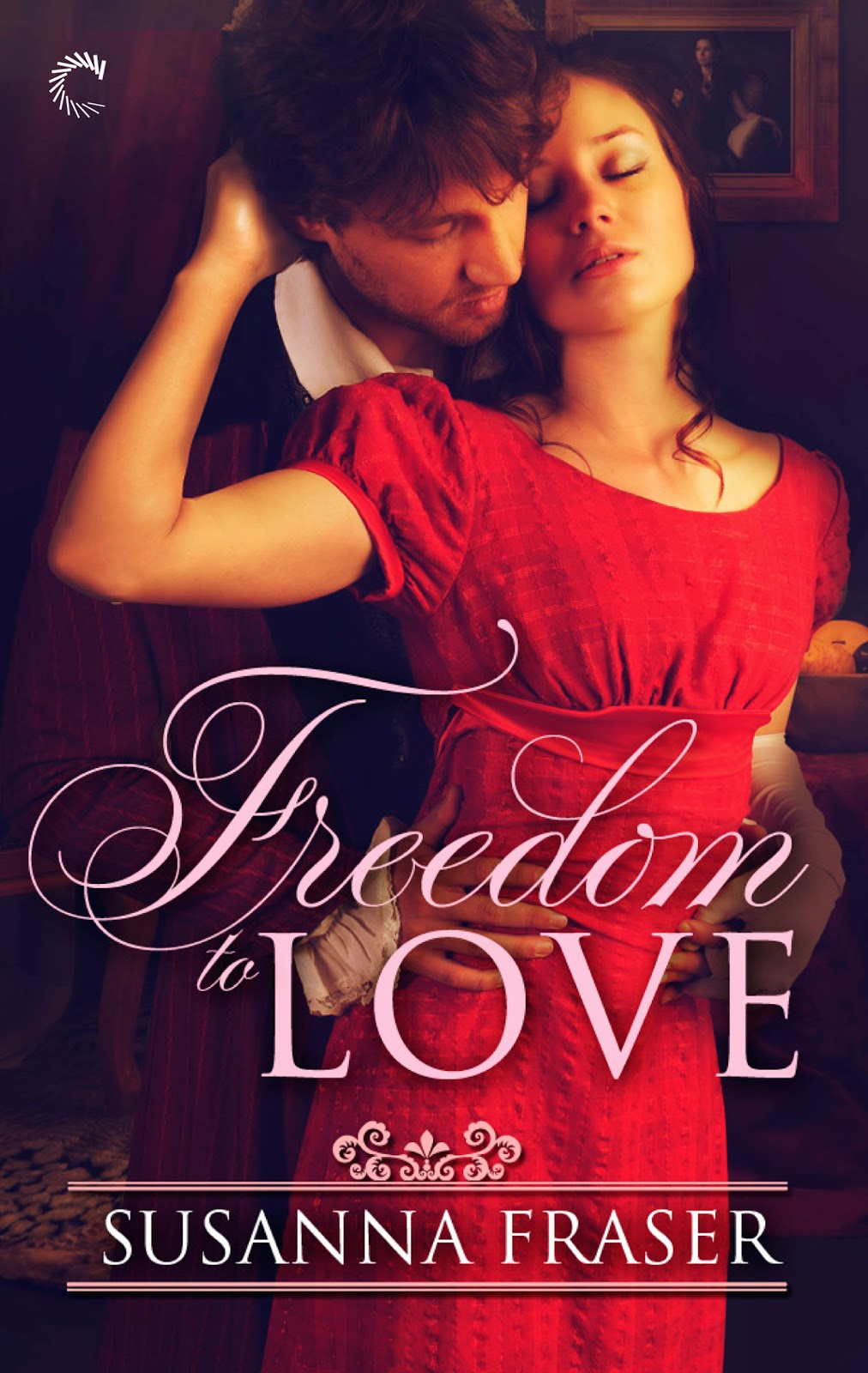 Granted, my first reaction to seeing a new cover is always, ALWAYS, "But that's not what they look like!" Which is only natural, since I can't download the images in my brain for the art department's benefit, and the celebrities I name on my cover art information forms as the closest approximations are unlikely to give up their lucrative careers in acting, pro football, and the like to take up romance novel cover modeling. (In this case I listed Tom Hiddleston and Rashida Jones.)

That said, this cover captures the mood of the story beautifully. I love the romance of it, the light and shadows, and especially the heroine's dress.
Posted by Susanna Fraser at 6:00 AM No comments:

At long last I'm doing something I should've done four or five years ago and setting up an author newsletter. I'd love to have you sign up...so much so that I'll be offering prizes to randomly selected people who sign up before my first edition goes out on November 24th, to coincide with A Christmas Reunion's release date.

What prizes, you may ask? Why, books, of course. I have a few print copies of each of my Carina releases, since they print them for any of their authors who want to enter the Rita contest. So I'll be giving away one copy apiece of The Sergeant's Lady, A Marriage of Inconvenience, An Infamous Marriage, and A Dream Defiant. I'm also attending the Surrey International Writers Conference later this month, and I mean to pick up some more prize books at the book fair. I can't promise which books exactly, but some of the authors who'll be there include Diana Gabaldon, Susanna Kearsley, Mary Robinette Kowal, Elizabeth Boyle, Susan Fox, Anne Perry, Sarah Wendell, and Chuck Wendig.

As for the newsletter itself, I promise not to spam you or overload your inbox. I'll send one on release day whenever a new book comes out, plus a quarterly newsletter with information on what I'm working on now plus a few fun things like short stories set in my characters' worlds, a diary of my Waterloo bicentenary European trip next summer, and possibly a recipe or two. And maybe I'll send brief announcements when one of my books is discounted. But that's it. I promise!

You can sign up here or simply use the sign-up box on the right sidebar of the blog.
Posted by Susanna Fraser at 6:00 AM No comments: