This week we're back in my historical romance novella WIP (1812 Spain, with the British army fighting Napoleon's forces), working title Jane's Second Soldier. Jane is with her new husband, Ben, who rescued her from the bully who was assaulting her when the story opened. He had to marry her right away to protect her, and they've had the problems you might expect from a couple who marry as near-strangers while one of them is still mourning her first love. But here they're having a moment of pure fun together for a change:

“That girl there–she’s offering kisses to every soldier who marches by!”

Ben turned and saw a pretty, dark-haired girl in a doorway, giggling and indeed bestowing mostly chaste kisses upon a line of happy redcoats.

“She’s well enough,” he said, “but you’re prettier.” And he set his hands on either side of Jane’s face and kissed her, there in the crowded, sunlit street. She stood stock-still for a moment, then melted against him, her hands coming up to span his shoulders.

For several precious seconds she leaned into him, and Ben forgot the noisy crowd around them, forgot the war, forgot his duties, forgot everything but the woman in his arms, her lips warm and soft under his, her hair sweet-smelling in the hot August sun.

Just to offer a little eye candy, I picture Ben as looking a bit like Sean Maher: 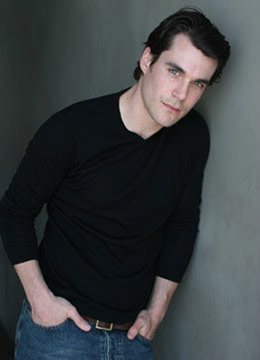 Comments and feedback always welcome--though please keep in mind that this is still in rough draft stage. Also, drop by the Six Sentence Sunday mothership to view other authors' work.
Posted by Susanna Fraser at 5:00 AM