Here we are less than a full week into the month, and I've already fulfilled my Buy & Read Challenge twice over. (For the challenge I have to buy at least one book per month in 2011, and then read at least one book I bought during 2011 each month, though I don't have to buy the books the same months I read them.)

First up was Captive Bride, by Bonnie Dee. 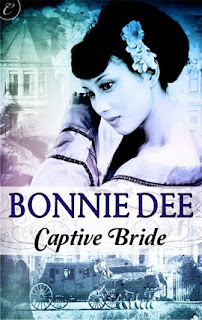 I'm always up for an unusual historical romance, and this one definitely qualifies. It's set in San Francisco in the 1870's, with a Union vet for a hero and for the heroine a Chinese merchant's daughter who comes to America thinking she's going to wed a wealthy businessman only to learn she's actually intended to be a high-end prostitute. She runs away and finds a refuge with the hero, who owns a general store. Dee doesn't rush past the language and cultural barriers that separate them, but makes you believe in the budding friendship and love that develop despite them.

While Captive Bride let me visit a world I'll never see in reality, my second book, God and Football, by Chad Gibbs, was a trip home. 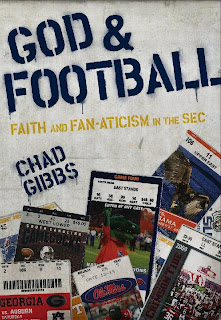 You see, I live in Seattle now, but I was born and raised in central Alabama, just south of Birmingham, where I was raised to be a Baptist and an Auburn fan. In that order. I think. I'm no longer a Baptist, but I'm still an Auburn fan. (I'm not an alum, but my oldest brother is, and since I went to Penn, which is not exactly what you'd call a football powerhouse, my education didn't change my rooting interests.)

Gibbs, an Auburn alum who is still a Baptist, realized that for someone who says he worships God, he spends a lot of time acting like his religion is Auburn football. Feeling like his priorities are out of order, he decides to spend the 2009 season attending one game at each Southeastern Conference stadium and talking to Christian students and fans about how they balance their sports fanaticism with their faith.

I'm not sure how well this book would work for someone who didn't grow up steeped in Southern religion and football culture, though I suppose it might be anthropologically interesting. But if you're from the South, and you're part of the 99% or so of Southerners who love football? You must get this book. It's hilarious, and you'll recognize yourself on every page.

I mean, look at me. I've lost my Southern accent. I self-identify as a Pacific Northwesterner. Mr. Fraser and I recently bought a house in Seattle, so we've got no plans of leaving anytime soon. I love my cool, soggy, green, mountain-girded adopted home city.

The two most Alabamian things about me now? Barbecue and football. When we threw a party to show our friends our new home and celebrate The Sergeant's Lady's release, I had barbecue flown in from Dreamland, because I'm sure not serving guests in my home the stuff that passes for 'cue out here. Seattle in general is foodie paradise, but for barbecue NSM.

And on the football side? Let's just say I thought I wasn't paying much attention to the SEC in 2009. It's tough to follow the SEC out here--the time zone difference works against you, and you don't get all the games televised, though between CBS and ESPN you get the important ones. Auburn had a meh season, finishing 8-5, 3-5 conference, and Alabama was on its way to a national championship, which didn't exactly bring joy to my Tiger heart. But just about every time Gibbs describes the games he attends, I think, "Oh yeah! I remember that play." Even when neither Auburn nor Alabama was involved. Because it's the SEC. REAL football.

Since I read the book in 2011, I had the privilege of knowing something Gibbs couldn't have known writing it--that 2010 was FINALLY going to be Auburn's year. I'm sure Gibbs had even more fun watching it up close and personal than I did from thousands of miles away, but he can't have yelled any louder than I did when Wes Byrum kicked the winning field goal in the BCS Championship Game.

So, Chad, if this post happens to pop up on your Google Alerts? WDE. And it's great to be an Auburn Tiger.
Posted by Susanna Fraser at 8:39 PM