Today I'm welcoming Delilah Marvelle, whose 2011 is off to an exciting beginning: the three books of her Scandal trilogy are coming out back-to-back in January, February, and March. Prelude to a Scandal is available now, and Once Upon a Scandal and The Perfect Scandal are just around the corner.

She'll be giving away a signed copy of Prelude to a Scandal to one lucky commenter. 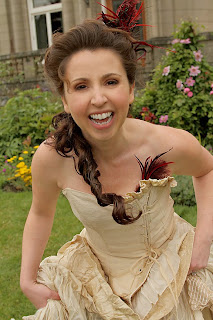 You have three books coming out one month after another. How did that come to pass...and how long did you have to write them?

The back to back books were offered to me by my publisher, HQN. I accepted the offer, knowing it was a great opportunity to build my readership in a three book sweep, but was rather nervous about whether I could pull off. Turns out, I could, lol. I wrote all three books in 10 months, not including revisions. I basically wrote 7 days a week 8-12 hours a day to make sure that I not only finished them but that they were the best that they could be.

Your Scandal series is set in 1829--post-Regency and pre-Victorian. What drew you to that time period? (Was it the puffy sleeves? The big hats?)

Yes, I write in the Romantic Period and it's by far my favorite era because it isn't quite Regency or Victorian and it allows me to bring together both sides of the era together. What drew me to the period was knowing that it was years after the Napoleonic wars and how the war rippled through and impacted people. People wanted change and it was coming in the form of the industrial revolution and so much more. So much was happening between 1820-1829, I just stick with that era and the more I learn, the more I realize I want to not only stay within that era but get to know it really well.

You've been on a book tour--can you tell us a little about what that's like? Any fun travel stories or bookstore adventures?

Touring is amazing fun and yet surprisingly exhausting. It isn't so much the traveling but having to be "on" the whole time. Talking about myself and my books makes me feel awkward sometimes but the enthusiasm of the readers allows me to feel more at home with the idea. Omgosh, there's always stories when you're on the road and meeting people all the time. I'm actually putting together a video blog of my book tour adventures with Lisa Hendrix (author of Immortal Champion). I'll be posting the video on my video newsletter and on youtube in the next week, so everyone will be able to be part of the fun!

Who are some of your favorite authors?

Almost all of my *favorite* authors are actually dead. Sadly, lol. Would have loved to have met Edith Wharton, Hemingway, Bronte sisters, Sienkiewicz, Dickens, and Austen. They shaped a lot of what I write. Of course, I should share that the one person who got me started Romance reading was Judith McNaught herself.

What are you working on now?

I'm working on a new trilogy for HQN which will be set in London and New York City in the 1820's. Since I haven't officially signed any contracts, I can't disclose any details, but I'll be posting it to my website as soon as I'm able to! But I plan on giving readers a new spin on historical romance. Which is always my goal.

Yes! I would love to know what they would love to see and what they do or do not want to read. I'm always curious about digging into the heads of readers, because I think too much like a writer.
Posted by Susanna Fraser at 7:00 AM