52 Cookbooks - Week One, Inn at the Crossroads

Last week I was staring at our cookbook shelf, wishing I had more time to cook. Our combined cookbook collection takes up almost as much shelf space as the Napoleonic Wars section of my research library (which I wish I had more time to read. Idly I wondered just how many there were, and counted 51. "That's one cookbook shy of being a blog series," thought I. When I remembered that the bloggers behind Inn at the Crossroads had just gotten a book deal, for a cookbook I'll inevitably buy once it's out, I realized I had one per week after all.

I decided to make a numbered list of cookbooks. Every week as I work on the grocery list, I choose a random cookbook and make at least one recipe from it. I have to cook from whatever book random.org spits out, with two exceptions: I won't grill when it's cold or rainy, and I won't bake in my no-AC kitchen when it's hot. It should be fun just because it's such a crazy mix--I've got aspirational ones like the Les Halles and French Laundry cookbooks, local collections from various places my family and I have lived, older books I inherited from my mother, including a 1951 Joy of Cooking, and everything in between.

The first cookbook randomly chosen happened to be the one that's still a blog--Inn at the Crossroads, where Sariann and Chelsea strive to bring to life the food of George RR Martin's A Song of Ice and Fire with a mix of medieval and modern recipes.

I was insufficiently ambitious to attempt Honey Spiced Locusts or Wintercake (though the latter looks yummy), but in a burst of energy I decided to make a whole meal from the blog, not one but three recipes.

For my main course I chose White Beans and Bacon, the medieval version, because Amazon Fresh wasn't carrying the curly endive for the modern recipe last week. It was ridiculously simple and wholly rich and delicious. IMHO it only works if you use a good, thick-cut bacon. I used the Organic Prairie brand, which I like even though I roll my eyes forever at the name, and it would've been even more awesome if I'd had any Skagit River Ranch bacon from my local farmers market. 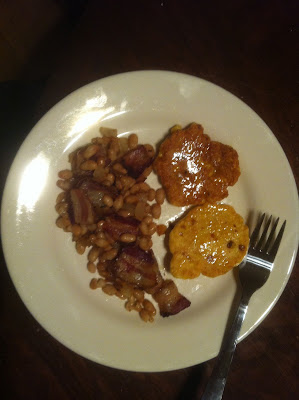 On the side I served Corn Fritters. Not sure what went wrong, but these were as much a failure as the beans and bacon were a success. All doughy and gritty. Maybe I made them too thick and large? At least the bean recipe is a keeper, and simple enough for a weeknight meal (though I probably shouldn't let myself have that much bacon VERY often).

For dessert, and to represent the fruit and vegetable group in the night's meal, I made the medieval version of Poached Pears from Highgarden. Also a failure, but one I'm much more likely to attempt again, because I know exactly what I did wrong. In my zeal not to overcook the pears, I undercooked them by a MILE, so the result was not so much poached pears as hard, warmed pears in a tasty wine sauce. So I'd like to try again, maybe around Thanksgiving or Christmas. Because did I mention the tasty wine sauce?

Here's what it looked like. You'll note mine is nowhere near as pretty as Sariann and Chelsea's: 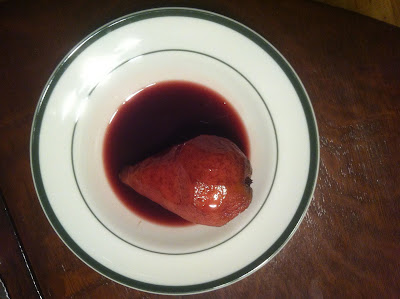