When I was growing up in rural central Alabama, everyone had the Calling All Cooks cookbook series. They were put out by an organization called the Telephone Pioneers (which Google tells me is a service organization made up of telecommunications workers and retirees), and they're typical fundraiser cookbooks. You know, the ones where all the recipes are contributed by the membership.

I'm not sure why these cookbooks reigned supreme over all the others of their kind. My mom's favorite pound cake recipe is somewhere in the first volume, and one of the pecan* pies has Good written in the margins in her careful, schoolroom-perfect penmanship, even though it's my copy, given to me as a bridal shower present. But for all that, they're just giant collections of the recipes your mother or your mamaw made if you're a Southerner of my generation. Lots of casseroles. Half the pages are devoted to cookies, cakes, and pies. The fruit salads tend to be full of marshmallows, jello, and coconut.

As you might guess, I wouldn't part with my Calling All Cooks set for the world, even though they're not how I usually cook. And when I drew Volume 3 for my Cookbook of the Week, I decided to go full-on Southerner and make me some casseroles, just like I'd do if my church was having a fellowship supper or one of my neighbors had somebody born or die in their family.

First up was tater tot casserole. Simple recipe, just ground beef, an onion, cream of chicken soup, and tater tots. I added salt and pepper even though they weren't listed because that's the minimum you do when you're browning ground beef. 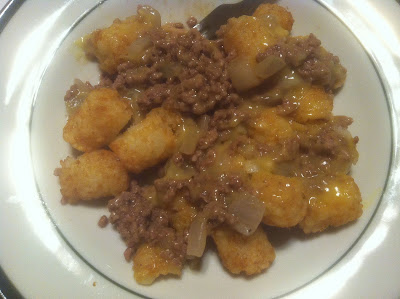 I expected something awesome, total guilty pleasure comfort food. What I got was ultimate blandness. I believe I could get the flavor I was expecting if only I replaced the ground beef with spicy bulk breakfast sausage and sprinkled some cheddar cheese over the top for the last ten minutes of baking, though. Maybe I'll try it that way, because everyone needs guilty pleasure comfort food in their lives.

Though I was afraid my taste buds had lost their affinity for the casserole, I made chicken spaghetti anyway. It was a slightly more complicated recipe, with multiple ingredients in the sauce and actual fresh vegetables mixed in. 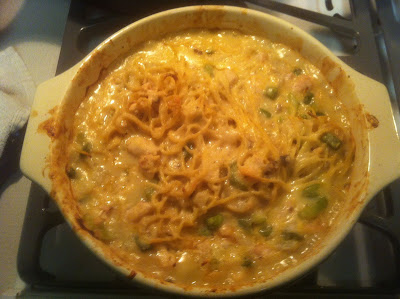 Not pretty at all, but so much tastier than the tater tot thing. I've been eating the leftovers for lunch all week.

Last but not least, I stumbled across the recipe for magic cookie bars, one of my mom's favorite quick sweet treats. I had to try it. Just a stick of melted butter poured in a 9x13 pan, topped by layers of graham cracker crumb, sweetened condensed milk, nuts (I used half walnuts and half pecans, since that's what I had in the pantry), chocolate chips, and coconuts. So very rich and sweet. When I was a kid, the chips were my favorite part. Now, I'd happily eat the graham cracker-butter crust all by itself.

*Incidentally, that's a "pick-AHN" pie. Not a "peekin" one, and most emphatically not a "pee-can" one. Also, barbecue MUST be pork, and is best served with a thin, vinegary, tangy red sauce. College football is more exciting and dramatic than the NFL game, the SEC is the best conference, and Alabama-Auburn is the best rivalry in all sports. War Eagle! (You can take the girl out of Alabama, but you can't entirely take the Alabama out of the girl.)
Posted by Susanna Fraser at 7:00 AM