I admit I gulped when I saw what the random draw had selected for this week's cookbook: The Bread Bible, by Rose Levy Beranbaum. Mr. Fraser selected it, not I, and I had too much going on this week to want to make a first attempt at yeast breads. And frankly, learning to bake my own bread is nowhere on my bucket list. (What is? Well, among other things, I want to see Paris and Rome, read War and Peace, ride well enough to at least go on a trail ride or two, and fence well enough to enter whatever low-level competitions there are for people my age. All I need is world enough and time.)

Anyway, fortunately for me the book had a whole chapter on quick breads, and I tried two recipes. The first, corn muffins, was an obvious choice, since I had stone-ground cornmeal on hand from the attempt at fritters last week. They're made with a little sugar and a lot of sour cream, and they turned out pretty tasty. 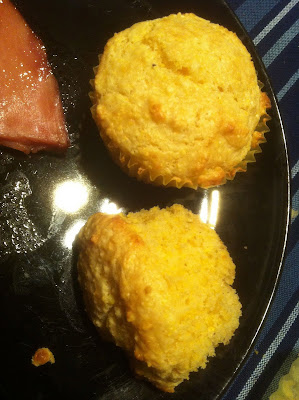 However, I don't think they'll supplant good ol' Jiffy corn muffins among my go-to side dishes. They're better, but not quite enough so to justify the extra effort to make them. Plus, Miss Fraser will eat the Jiffy muffins, but she turned up her nose at the gritty texture these got from the stone-ground cornmeal.

For dessert we had chocolate bread, which was a huge success. The recipe suggested including chocolate chips, but I left them out. As much as I like chocolate, I tend to find double- and triple-chocolate desserts kinda overkill. When I make this again--as I surely will, probably for holiday care packages--I think I'll try white chocolate or butterscotch chips. Or, even better, PECANS. Nom nom nom... 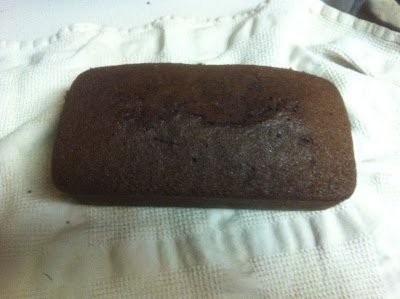 Not a photogenic dessert, at least not in my amateur-with-an-iPhone hands, but rich and buttery and altogether delicious.
Posted by Susanna Fraser at 7:00 AM