This week's guest is Celia Jerome, author of a newly released fantasy novel, Trolls in the Hamptons. Isn't that a wonderful cover? I'd definitely walk across a bookstore to pick it up and find out more. 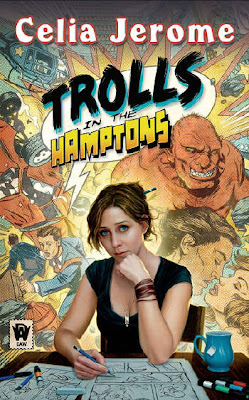 Take it away, Celia!

Hi. My name is Celia Jerome and I live in Paumanok Harbor, Long Island, New York. I’m mid-thirties and my very first book, TROLLS IN THE HAMPTONS, came out last week.

Well, TROLLS IN THE HAMPTONS just came out from DAW Books, but that’s the only real fact in my introduction. The rest is as fictional and fantastical as TROLLS. There is no such place as Paumanok Harbor, no such person as Celia Jerome, my age is no one’s business, and this is not my first book, by a lot. There may or may not be trolls in the Hamptons.

Here’s why I’m using a pen name and new persona:

First, I’ve published a bunch of Regency romances and Regency-set historicals and Regency novellas. I have a room full of reference books for them and a shelf full of awards for them. What I didn’t have was a bunch of fresh new ideas for them. The market was tending toward longer, deeper, sexier, darker Regencies, places I wasn’t comfortable going. I found myself adding paranormal elements, just to keep my imagination happy. Some readers liked them, some didn’t. I loved writing them. So why not go for it?

Because I really couldn’t afford to write on spec, without a contract. Because I had no creds in any other genre, so I’d have to finish the whole book before showing it. Because I was so well established in the Regency era. Because my agent didn’t think it was a good idea. Because most fantasy and paranormal romances were long, dark, deep and sexy. Vampires and werewolves and steam punk, oh my.

I wrote TROLLS IN THE HAMPTONS anyway, and had a blast. It’s contemporary fantasy, with small-town magic. No one could say I got my facts wrong, because I made them up as I went along. Everyone in Paumanok Harbor is either a pre-cog, a weather maven, a locator, or a truth-knower— or whatever I want them to be. The plumber is a scryer, the librarian always knows what book you want, the post master has a seeing-eye dog. My heroine, Willow Tate, is a graphic novelist, and the Visualizer for a hidden universe. The hero is a British agent from the Department of Unexplained Events, or DUE. (I couldn’t resist making him an English lord.) And the troll? He’s a trespasser creating chaos while searching for his kidnapped halfling brother.

I sent it out myself, and sold it to the first publisher who saw it. They also bought the second in the series, NIGHT MARES IN THE HAMPTONS (May, 2011) from an outline. Then I got a wonderful new agent and sold three more: FIRE WORKS IN THE HAMPTONS, LIFE GUARDS IN THE HAMPTONS, and SAND WITCHES IN THE HAMPTONS. For those of you who mightn’t know, the Hamptons are a group of summer resort communities a couple of hours from Manhattan along the Atlantic coast at the eastern end of Long Island. Think tourists, fishermen, surfers, wealthy second-home owners, gorgeous scenery, celebrities, the Montauk Lighthouse, traffic jams, retirees and hard-working locals. Winters are quiet and gray. A writer can get a lot of work done without distractions. I wrote a lot of Regencies snug inside with my dog and my laptop, and read many more.

Suddenly, though, I was set in an exciting new genre with the security of signed contracts. Instead of my beloved Regencies, I took to reading chick lit and mysteries, for the contemporary feel. I took my mother’s and father’s first names and started planning a website at
www.Celiajerome.com.

Unfortunately, my usual Regency readers would be dismayed. Trollops maybe, not trolls. Readers of fantasy might recognize my name and think, oh, she only writes historicals. So for now I am reinvented and reinspired as Celia Jerome, but people can always check the name on the copyright page, if they buy the books!

Thanks for stopping by, Celia! Readers, please feel free to chime in with any questions you may have for her.
Posted by Susanna Fraser at 7:00 AM