Random Cookbook of the Week - How to Cook Everything

This week's random cookbook draw was Mark Bittman's How to Cook Everything, which lately is my go-to everyday cookbook. It's pretty comprehensive, and it's more in tune with how I like to cook and eat than something like The Joy of Cooking or the Better Homes and Gardens Cookbook. But above all, it's available as a handy, searchable, cross-referenced smartphone and tablet app.

Since the whole point of this challenge is to try something new, I settled on one of the few quick pasta sauces I'd yet to attempt:

(I added some chopped garlic and crushed red pepper flakes, since the one flaw with Bittman's recipes, IMHO, is that they run a little bland.)

Meanwhile, cook and drain pasta, then toss with the ragu. Garnish with freshly grated pecorino Romano and serve. (I used parmesan, since I had some on hand.) 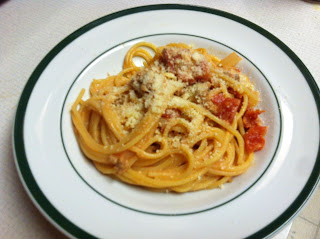 Looks like a reasonably tasty traditional pasta, right? I suppose it would've been if I'd liked the flavor of the lamb, but I didn't. I've had a mixed reaction to lamb in the past, depending on the quality of the lamb and how well it was prepared. This? Just tasted kinda off and funky. I know it wasn't spoiled--I trust my grocer, my fridge, and my own sense of food's freshness enough for that. Plus, it's been over 24 hours, and no one at House Fraser has food poisoning.

I guess I'm just being an American, who thinks of meat as coming in three flavors only: cow, pig, and chicken. (Well, I've had duck and rabbit in restaurants and liked them, and since I come of a rural Southern family where most of the men hunt, I've had venison and quail, and they are DELICIOUS.)  But I didn't finish my plate this time, and I won't be taking the leftovers for lunch this week. Maybe I'll try the recipe again someday with beef or pork.

Labels: food, How to Cook Everything, Mark Bittman, random cookbook