Random Cookbook of the Week - Good Eats: The Early Years

This week I drew Good Eats: The Early Years, the first of a trio of cookbooks, all of which we own, from Alton Brown's popular and long-running show. So far I've had universal good luck with every Good Eats recipe I've tried, though I've yet to attempt any of the truly complex, gadget-heavy, and time-consuming projects.

My recipe selection this time around was a no-brainer. I picked Southern Biscuits, because Alton's grandmother, Ma Mae, who taught him how to make them, reminds me of my own Mamaw, and because my mother used to make homemade buttermilk biscuits from scratch almost every day, without a recipe. I never learned, unfortunately, because by the time I'd outgrown trying to be as different from my mother as I possibly could, she'd gone to using a local brand of frozen biscuit she thought almost as good as homemade.

I followed the recipe (linked above) closely, including the book's advice to use three parts regular all-purpose flour to one part cake flour if you don't have access to a Southern flour brand like White Lily. The results looked like this: 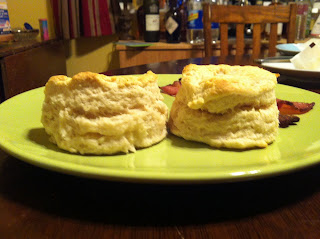 They smelled like my mom's biscuits, to the point I was carried off on a wave of memories just from the scent of the dough. They tasted like them, too, pretty much. Unfortunately, they were also heavy. Bricklike, even, though Mr Fraser ate them happily enough and Miss Fraser the Finicky wants to know when I'm making them again.

I think my mistake was letting the butter and shortening get too warm and melty as I was working them into the dry ingredients. Next time I'm not pulling them from the fridge till the very last minute, and I might use a pastry cutter instead of my fingertips to cut them in.
Posted by Susanna Fraser at 6:00 AM