What Not to Wear to RWA

As promised, I'm going to talk about dressing for RWA National, probably over the course of several posts, since it occurs to me that if I wrote many short posts instead of one long one on any given topic, I'd update my blog more often AND produce more readable posts. Win-win!

So, as a quick overview/introduction, I'll just say that you really shouldn't worry too much about your clothes. Mind you, I'm speaking as someone who has a spreadsheet listing what I plan to take and what still needs to be bought. But that's not worrying, that's planning. I work in a very casual environment, and my summer wardrobe needs some filling out in general, so it makes sense to evaluate what I have on hand and plan some shopping trips. I'm just not obsessing about it the way I did before my first National back in 2006.

Because, really, it's harder than you think to get it wrong because of the sheer variety of people attending National. I bet there's at least a 50-year age gap between the oldest and youngest writer there, and there will be women from all over the country and not a few from overseas. A twenty-something kindergarten teacher from rural Indiana is just going to dress differently from a thirty-something lower-level university administrator from Seattle (i.e., me) or a forty-something stay-at-home-mom from Pennsylvania or a fifty-something best-selling full-time author from Atlanta and so forth and so on.

And that's fine. We don't have to all fit the same mold. Plus, once you know that there's no one correct way to look like a writer who belongs at RWA National, you can stop obsessing over every single scrap of clothing you pack.

That said, I can think of three common mistakes to avoid when dressing for a writers conference:

1) Too Sloppy: Many will advise you not to wear jeans at all to RWA, and that's certainly a safe choice. Personally, I think they're fine as long as they're reasonably new (i.e. not visibly worn or faded) and paired with a nice shirt and shoes. In other words, dress up the jeans, don't dress down to them.

What stands out to me as too casual isn't jeans, but khakis, shorts, or jeans paired with some combination of sneakers, a t-shirt (especially if it has writing on it), and a baseball cap. If you bring such items at all, save them for the plane and whatever touring you do outside of conference hours. Don't wear them to workshops.

2) Too Shiny: On the flip side, I've seen writers show up at workshops dressed in clothes more suited to a bar or a dance club than a daytime professional event. My advice? Save the shiny, slinky looks for evening events--of which there are plenty--and play it more subtle during the day. 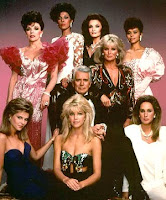 3) Too Last Century: A friend of mine once noted that people tend to get fossilized in whatever fashion era they graduated high school or college in. I know it took me longer than it should have to let go of my early 90's fondness for baggy flannel shirts. Every once in awhile you'll see an extreme version of this fossilization at a writers conference--someone who looks like she just stepped out of a time machine from 1985 or so, big hair, obvious shoulder pads, and all. If you rarely shop and haven't changed your hairstyle in over a decade, do at least consider updating your look. You don't have to throw out everything. Just look around you a bit more to get an idea what people are wearing now, have fun at the mall picking up some new pieces on sale, and ask your hairstylist to try something new. You don't want to be 1985 Woman.