Today's guest on my blog is fellow Carina author Shawna Reppert, whose m/m fantasy romance The Stolen Luck released this week! By the way, isn't that a gorgeous cover? Carina consistently provides quality covers, but I think they've outdone themselves this time. 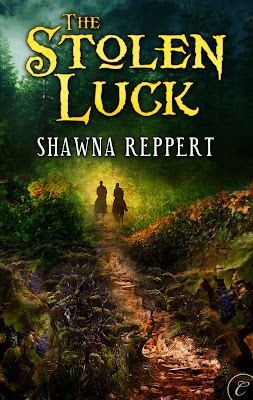 In some ways, writing an original-world fantasy is easy.  No need to scour the web for reference photos and old maps, no need to worry about getting caught out by a reader who knows that Main Street in Nameatown runs east/west, not north/south.
On the other hand, you face the daunting task of making a world up entirely out of your own imagination.  It needs to be detailed enough to feel real, and it needs to make sense.
In the opening of The Stolen Luck, my protagonist, James Dupree, is travelling through an area that he doesn’t particularly care for, a land where slavery is legal.  I had already decided, arbitrarily, that his own estate is in the North.  I realized that put the opening in the South would add unintended political and historical resonances, even though the novel is set in a fantasy world vaguely equivalent to late medieval/early Renaissance Europe in technology and feel.
So, he’s travelling through the Midlands.  To give the world a more complete feel I make mention of the South by implying that the Dupree wines must be famous indeed to be traded that far.  I reference the East by implying that fine horses have a touch of Eastern blood, a detail borrowed from our own world, where hotter, finer-boned horses descend at least distantly from Arab and Barb breeds.
I actually borrow quite a bit from our world.  The rolling vineyards surrounded by tall forests will feel familiar to any of my neighbors.  The weather on the journey from the Dupree manor to the elven sanctuary of the Lands Between fall in similar patterns to those I’ve come to respect on the mountain where I keep my horse.  The north wind in winter brings bitter cold, dry weather; the winds from the west bring rain and snow.
I wanted the magical elements of the novel to have an almost fairytale feel, and so the Lands Between the Worlds bear a resemblance to cnuc na Sidhe, the faerie underworld of Celtic myths and legends.  At the same time, I wanted to give the world something unique and original.  Cloaks of invisibility, magic swords, elixirs that heal wounds, all these have been done and done again.  I decided that the chief function of the Luck, the talisman in my novel that James will do almost anything to recover, is to make vineyards thrive and make the wine from those vineyards exemplary beyond all others.  (It does other things, but loss of its influence on the vineyard and the wines his family depends on is what causes James Dupree to risk both life and honor for its return.)
As a final note on worldbuilding, unless you really know your biology and your atmospheric science, keep your trees green and your sky blue.  (I had to get the blue in there somehow to justify the title!)

How far will a good man go to save his home and loved ones?

Lord James Dupree must recover his family's stolen Luck, the elven talisman that has protected the Dupree lands for generations. Without the talisman, the Dupree vineyards are failing and creditors are closing in. The Luck is his only hope of saving his home and his family from poverty and ruin.

Despite his abhorrence of slavery, James wins an elven slave in a game of cards. The slave, Loren, provides the only chance to enter the Lands Between and recover the stolen Luck. Despite James's assurances and best intentions, Loren does not trust his new master and James finds it all too easy to slip into the role of slave master when Loren defies him.

As the two work together through hardship and danger, James finds himself falling in love with Loren. And when a hidden enemy moves against them, he must choose between his responsibility to his family and his own soul.