This week's random draw turned up another Bittman cookbook, Food Matters. Unlike my other Bittman books, this one focuses as much on health and sustainability as the food itself, and some of the recipes are a little too earnestly Good For You for my taste. So I chose one with both "sweet potato" and "bacon" in the name, figuring you can't go wrong with those in the mix:

2 large sweet potatoes, peeled and cut into bite-size pieces
1/4 c. olive oil
Salt and freshly ground black pepper
2 thick slices of bacon
1 red bell pepper, cored and chopped
1 small red onion, halved and thinly sliced
1 T peeled, minced fresh ginger
1 t ground cumin
Juice from 1 orange (I used 1/3 c orange juice)
1 pound fresh spinach leaves (the package I bought from the store only had six ounces, but it was the perfect amount--more than that wouldn't have fit in the salad bowl, and the dressing wouldn't have been enough to flavor it) 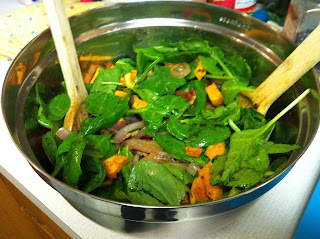 1. Heat the oven to 400 F. Put the sweet potatoes on a baking sheet, drizzle with 2 T of the oil, sprinkle with salt and pepper, and toss to coat. Roast, turning occasionally, until crisp and brown outside and just tender inside, about 30 minutes. Remove from oven and keep on pan until ready to use.

2. While potatoes cook, put the bacon in a skillet and turn the heat to medium. Cook, turning once or twice, until crisp. Drain on paper towels and pour off the fat, leaving any darkened bits behind in the pan. Put back on medium heat, and add the remaining oil to the pan. When it's hot, add the bell pepper, onion, and ginter. Cook, stirring once or twice, until no longer raw, then stir in the cumin and the reserved bacon. (Though the recipe didn't say to do so, I crumbled the bacon.) Stir in the orange juice and turn off the heat.

3. Put the spinach in a bowl large enough to comfortably toss the salad quickly. Add the sweet potatoes and toss to combine. Taste and adjust seasoning, and serve.

It was pretty good. I don't think it'll be a new favorite, but the flavor combinations worked and it made for a pleasant dinner.
Posted by Susanna Fraser at 6:00 AM