The symbolic weight of a cake dome

I have a cake dome, almost identical to this one: 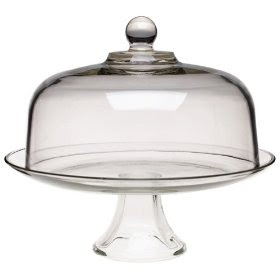 I registered for it back in 1999 when Mr. Fraser and I were planning our wedding and received it as a gift.

I have used it exactly once in the past 11 years.

So you'd think it'd be a no-brainer to give it away now that we're almost done moving to a new house. In general I've been de-cluttering with wild abandon. I've taken bags of books I don't expect to re-read to my local library. Toys my daughter no longer plays with get donated if they're in near-new condition, thrown away if not. Clothes I wore 15 pounds ago get donated, because if/when I lose enough weight to be that size again, I can reward myself with new clothes instead of pulling out old ones that don't even work right with my current job's unwritten dress code.

But the cake dome still sits in our old house, waiting for me to make a decision. Because, you see, my mother had a cake dome. And she used it a lot. That woman could make a layer cake, and she was always taking them to church potlucks or giving them pride of place on a holiday dinner table.

I've always been more my father's child than my mother's. I'm neither very girly nor very crafty, and Mom was both. But some part of me thought that being married was going to make me more like my mother--at least to the point where I'd bake layer cakes and serve them when company came for dinner.

It hasn't worked out that way. Mr. Fraser and I don't have people over for dinner as often as I thought we might. When we do, I rarely bake a cake. I serve brownies with ice cream, or in-season strawberries over store-bought angel food cake, or make pecan pie. I make delicious pecan pie, if I do say so myself, though my mother would shake her head at me for using store-bought crusts.

So, logic dictates donating the cake dome to the same thrift store that's gotten all our old clothes and toys. But I'm having trouble following the dictates of logic this time (despite having a strong Vulcan aspect to my personality for a romance writer). Because, as you've probably deduced from my verb tenses, my mother is dead. Both my parents are, in fact. Lung cancer took Dad in 2005 and Mom at the beginning of this year. Too soon, in both cases, and cancer is never anything less than an evil beast. Letting go of that cake dome feels like more than just giving away another object I'm not using.

For now, I think I'll hold onto it. Maybe in a year or two, it'll be time to give it away...or I'll have gotten around to learning to make my mom's chocolate layer cake or my mamaw's burnt sugar cake. We'll see.
Posted by Susanna Fraser at 4:04 PM