Today I welcome my fellow Carina author Keri Stevens, talking about a subject that's near and dear to my heart lately: all the lessons we new authors learn AFTER our first sales:

Clichés in the Happy Ever After

1. Be Careful What You Wish For

Before “The Call” I knew how it would be. I’d thank Angela James with quiet dignity, and save the squealing for later. Birds and butterflies would flutter between us as my agent, Jill Marsal and I ran to each other in a field of flowers. In one cinematic cut, I’d find myself in convertible, waving my pageant wave at adoring readers while confetti cannons shot their loads into the air.

And then I did get the call. And do you know what I remember about that week? The shaking. The inability to eat. The random tears. No one (not ONE of you published author friends, you!) told me I’d be scared spitless, because my Precious Baby Manuscript was the object of contracts and a saleable entity. I had choices to make where there had been none before—including potentially poor choices.

(For the record, after several months I’m convinced I made the right choices. Whew!)

2. The End is Just the Beginning

They love your Precious Baby Manuscript. They believe in it. And then they say “But.” Quietly, implacably. Your PBM isn’t good enough yet, and industry experts know it.

My editor, Deborah Nemeth guided me through three rounds of edits. We bent, changed and worked Stone Kissed to take it from what I thought was fabulous to…well, fabulous. Although “stetted” some things I felt strongly about keeping, I took most her “suggestions” and let a few thousand words and a couple characters go. In the process, my PBM grew up and became a Book.

Even after signing off on the final round of edits, I wasn’t finished. Readers are tech-savvy and connected—and they want to know the woman behind the curtain. I couldn’t go all Salinger and bury my head in the typewriter. Through twitter, facebook and blogs--

STOP! Look back at that almost-sentence. Ten years ago, it would have made absolutely no sense. Okay—back to your regular blog post…

….much like this one, I participate in the romance reading and writing community. How I participate may change from one day to the next since publishing resembles the Tower tarot card-- everything in chaos, falling apart and coming together as something new. But people are still people. So I ask daily, “Where’s the party?” and come out to play. It is a constant daily challenge, however, to balance social networking with, you know, writing.

Now STONE KISSED is out in the hands of reviewers and readers. Most really like it, a few really don’t—and usually for the exact same reasons. Oddly enough, I’ve found the process of being reviewed rather freeing. I’ve got textual proof I can’t please everyone, so I no longer feel I have to. I’ll find my readers and they’ll find me and together we’ll travel to happy-ever-after.

Don’t get me wrong: I don’t ignore valid critiques. I use them when I’m in an analytical/editing frame of mind, taking what reviewers have to teach me and applying some of it to the next book.

I waste plenty of time checking Amazon, Goodreads and BarnesandNoble.com. When someone tweets, “I just read STONE KISSED,” I exhale and think, “There’s one more.” In my other job, I work X dollars a week and charge Y dollars per hour. In this job, I’m still months away from a royalty check with no idea what to expect.
And guess what? Multi-published authors with years of backlist don’t know what to expect either. So—head down and write the next book.

But the biggest surprise has been readers who say to me, “I want more. I want to know what happens with this character. I want to know more about the history of Stewardsville. When is your next book coming out?” Those moments are worth the fear, the uncertainty and the work. They motivate me to get my butt in the chair, because the readers are waiting.
--------- 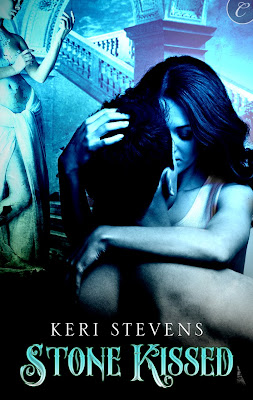 After an arsonist torches her ancestral home with her estranged father still inside, Delia is forced to sell the estate to pay his medical bills. Her childhood crush, Grant Wolverton, makes a handsome offer for Steward House, vowing to return it to its former glory. Delia agrees, as long as he’ll allow her to oversee the restoration.

Working so closely with Grant, Delia finds it difficult to hide her unique talent—especially when their growing passion fuels her abilities.

But someone else lusts after both her man and the raw power contained in the Steward land. Soon, Delia finds herself fighting not just for Grant’s love, but for both their lives…

Bio;
KERI STEVENS was raised in southern Missouri and has lived in Germany, Arizona, North Carolina and Kentucky. Along the way she acquired degrees in writing and German, a romance hero of her very own, three sons, two miracle cats and a mutt who licks her when she speaks German.

Her husband gave Keri her first romance novel to read, which unleashed a passion. Several years and a couple thousand novels later, Keri took up her laptop and began writing her own books.

By day, she is a mild-mannered yoga and Oriental dance instructor. By night she creates mayhem and magic in small-town paranormal romance novels like her award-winning debut, Stone Kissed.