I am inordinately fond of the 1822 David Wilkie painting "Chelsea Pensioners Reading the Waterloo Dispatch." It's so happy, you see. I don't think it's Great Art, but I find it impossible to look at without catching at least a tiny bit of the characters' jubilation. A quarter century of almost continual war is over at last, and even the dogs and the baby are thrilled.

Lately what catches my eye the most is the black man near the center of this detail from the painting: 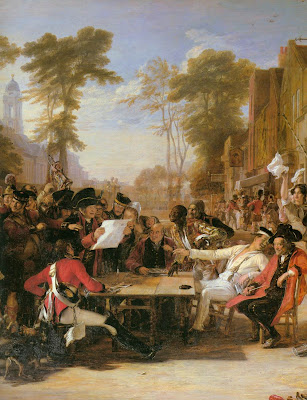 He's there in the midst of the action, celebrating with the rest, and there's no hint I can see that he's relegated to any kind of lesser status. His features are possibly somewhat caricatured in that he's got a bit of a receding forehead, but so do some of the whites in the painting, so I'm inclined to give Wilkie a pass.

There were somewhere between 5000-10,000 blacks in London in the early 19th century, all of them free, and it stands to reason some of them must've been Napoleonic War veterans. There were also black soldiers on the French side. I recall reading that when the French army was in Egypt in the late 1790's and needed more manpower, one of the things they did was buy Sudanese slaves and offer them their freedom in exchange for military service--and that some of them fought in the Grande Armee for the duration of the wars.

There's a fascinating story waiting to be discovered...but I don't think I'm the one to write it. I'm not of the school that believes authors should be limited to their own ethnic groups for protagonists. But for someone like me who's not just white but eligible for the Daughters of the Confederacy (though I'd never DREAM of joining) to take it upon herself to tell the story of a black soldier under Napoleon or Wellington feels...presumptuous, to put it mildly. But somebody should do it.

That man in the painting and what I think he represents fascinate me so because I've been quietly following the discussions of the Confederacy, the Civil War, and their continuing repercussions in American society on Ta-Nehisi Coates's blog. And one of the recurring topics is black soldiers--how black regiments were established in the Union army, what whites on both sides thought of them, debunking the false claim that substantial numbers of blacks fought for the Confederacy, and so on. Given the rampant racism of the time, there was considerable shock, even on the Union side, to discover that blacks made just as good soldiers as whites. Even though there were presumably plenty of Frenchmen and Englishmen still in living memory who wouldn't have been surprised in the least.
Posted by Susanna Fraser at 7:00 AM