Since the beginning of the month, I've been hard at work on a new manuscript that's currently 12,000 words long. Problem is, I had to write something like 20,000 words to get that 12K.

Or maybe that's not such a problem after all.

I'm a pantser--or at least I'm toward that end of the plotter-pantser continuum. For those of you unfamiliar with those terms, a pantser is someone who writes by the seat of her pants, without benefit of an outline or a lot of advance planning, while a plotter doesn't start writing her manuscript till she's prepared an outline, or interviewed her characters and written out their biographies, or drawn up elaborate charts illustrating her characters' goal, motivation, and conflict throughout the story.

At the most extreme end, I've met romance writing pantsers who aren't sure who the heroine will end up with when they start writing, and mystery pantsers who figure out whodunnit right alongside their characters. I'm not that extreme. I always have some idea how the story will end. Usually I have several vividly imagined scenes that come to me in the first rush of enthusiasm over a new idea. I just don't know how exactly how I'm going to get to them. It's as if those scenes are mountains along the horizon, and the writing process is figuring out how to get there. 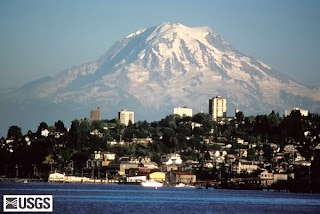 The reason it's taken me 20,000 words to produce a 12,000-word start to a manuscript is that twice I've been in the middle of a scene and gotten a feeling that something was wrong. What I thought was a trail leading to the beautiful snow-capped volcanic peak of my first major turning point actually got me lost in a tangle of thorny blackberry vines. (Volcanoes and blackberries both being beauties--or hazards--of my local Northwestern environment.)

So I did the sensible thing. I cursed--metaphorical blackberry vines can be almost as prickly as the real thing--carefully backed out until I could see the mountain again, and tried a new way to get there. Part of me hates doing that. It makes my word count sound so much less impressive. But one of my critique partners pointed out I used to be much slower at identifying those wrong paths. As in, finish a manuscript and have to start over from scratch slower. Far better to catch the problems right away. 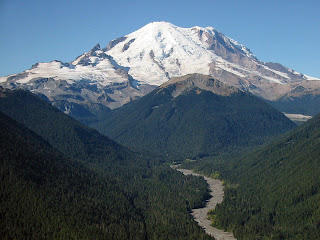 And really, 12,000 words with eight days left in the month isn't bad at all. I shoot for 10K/month minimum when I'm in draft mode, so I'm there with room to spare. It's just hard to let go of that perfectionist vision that this time I'll write 1000 words/day, every day, and that all the scenes will be the right ones, none of this standing surrounded by blackberry thorns and wondering where that mountain has got to.
Posted by Susanna Fraser at 7:15 PM