Random Cookbook of the Week - Ad Hoc At Home

Mr. Fraser and I are foodies (though I'm not in love with that term). When I got an announcement via email that Maria Hines is opening a Southern Italian place to go with her fabulous New American Tilth and her intriguing Mediterranean Golden Beetle, we spent the next 15 minutes chatting about the relative claims of Northern and Southern Italian cuisine, their history in this country, and how much we looked forward to Hines' take. I'd rather have pizza from Serious Pie than anywhere else, we love to celebrate over the bread pudding at Boat Street, and after my first sale Mr. Fraser took me to Seattle landmark Canlis.

I've promised him that if I ever make the New York Times bestseller list, I'm flying him down to California so we can dine at Thomas Keller's French Laundry. We have two Keller cookbooks-- the daunting French Laundry Cookbook and Ad Hoc At Home, which is comfort food, Keller style. That is to say, comfort food to daunt your average home cook.

I like to think this cookbook challenge is making me a touch harder to daunt, so I plunged in and attempted...

- 12 oz applewood smoked slab bacon (I used thick-sliced uncured bacon from Skagit River Ranch, which you MUST try if you're in the Seattle area. It is the bacon of the gods, I swear.)
- Canola oil
- 3 lbs Yukon Gold potatoes
- Kosher salt
- 1 thyme sprig, leaves only
- 1 c. Melted Onions (recipe below)
- Freshly ground black pepper
- 1 T. minced chives (I forgot these but it still tasted delicious)

Cut the bacon into lardons about 1 inch long and 1/2 inch thick. Set aside.

Pour about 1 1/2 inches of oil into a large saucepan and heat to 300 F. set a cooling rack over a baking sheet and line the rack with paper towels.

Meanwhile, square off the sides of the potatoes to give them a rectangular shape and cut into 1/2-inch dice. They may not all be perfectly square, and a bit of skin left on the cubes is also fine.

Add half the potatoes to the hot oil and cook for about 8 minutes, until tender and a rich golden brown; they will not be crisp. Remove from the oil with a wire skimmer or slotted spoon and drain onto the paper towels. Repeat with the remaining potatoes.

Pour 2 T water into a medium saucepan and set over medium heat (the water will keep the bacon from crisping as the fat begins to render). Add the bacon, reduce the heat to medium-low, and let the bacon render its fat for 30 minutes. The bacon will color but not become completely crisp. Using a slotted spoon, transfer the bacon to paper towels to drain. Drain the excess fat from the pan, leaving just a film of fat to cook the potatoes; reserve the extra fat.

Transfer the potatoes to a serving bowl, add the minced chives, and garnish with the remaining bacon. 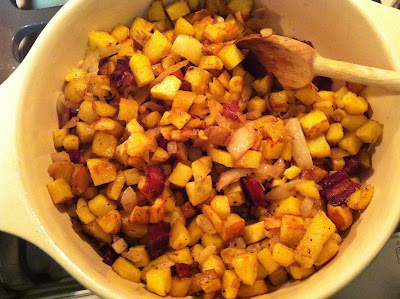 I know, I know, it just looks like potato hash. But, trust me, it tastes like what all the other hash you've ever eaten only aspires to be.

I paired it with sauteed rainbow chard and medium boiled eggs, the latter mushed in with the hash as we ate it. And it was the perfect Sunday night dinner.

Here's how to make the melted onions. Keller tells you to put the herbs into a sachet, but my local grocery doesn't carry cheesecloth, so I just pulled the bay leaf, thyme, and garlic clove out when I was done and used freshly ground pepper instead of whole peppercorns. I also halved the recipe, since it was all I needed.

Put the onions in a large saute pan, set over medium-low heat, sprinkle with 2 generous pinches of salt, and cook, stirring from time to time, for about 20 minutes, until the onions have released much of their liquid.

Stir in the butter, add the sachet, cover partially, and cook slowly over low to medium-low heat for another 30-35 minutes. The onions should look creamy at all times; if the butter separates, or the pan looks dry before the onions are done, add a bit of cold water and stir well to re-emulsify the butter. The onions should be meltingly tender but not falling apart or mushy. Season to taste with salt.

Once cooled, the onions can be refrigerated for up to 3 days.

These are almost, but not quite, like caramelized onions, and they have a sort of sweet pungency reminiscent of roasted garlic--quite a transformation for butter and plain yellow onions, believe me.
Posted by Susanna Fraser at 9:16 PM