This week's cookbook was Great Food Fast, from the editors of Everyday Food magazine. I've found its recipes to be just fast enough to qualify as weeknight recipes, especially if for the rest of the week I'm planning ultra-simple meals like baked potatoes, quesadillas, or spaghetti and non-homemade meatballs. This recipe was no exception. I made it on a Wednesday night and spent a little over an hour in the kitchen. Now that I'm familiar with it, I could probably pare it closer to 45 minutes for future attempts.

Sprinkle the chicken breasts with 1/4 t each salt and pepper. Heat 1 T of the oil in a large skillet over high heat. Add the chicken; cook until lightly browned, 2-3 minutes per side. Transfer to a plate.

Pour the wine into the skillet; cook, stirring, until evaporated, 1 minute. Add the stock and parsley; cook over medium-high heat until the mushrooms are tender and the liquid has reduced, 8-10 minutes.

Return the chicken to the skillet. Cover; simmer over low heat until the chicken is cooked through, 10-12 minutes. Serve the cutlets with polenta topped with the mushrooms and a drizzle of the cooking liquid. Garnish with additional fresh parsley. 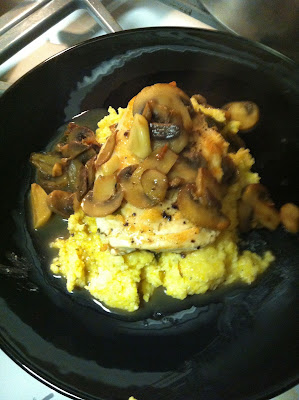 The recipe was accompanied by one for oven-baked polenta, but I just made a regular stovetop batch, which turned out a little dry, probably because I was overcompensating for a recent batch that turned out too soupy. It's quite a tasty recipe, though I think next time I'll increase the wine relative to the broth to give the sauce a richer taste.
Posted by Susanna Fraser at 10:22 PM