I decided to change my old 52 Cookbooks series to Random Cookbook of the Week--that way I get to drop the books I know don't work very well and keep the series going indefinitely.

I've got a list of 30 cookbooks and food blogs, which I'll add to as I find new books/blogs. Each week I'm going to draw one from random.org and cook from it unless it's utterly the wrong time of year. I'm not baking in a heat wave, since my kitchen has no AC; nor am I firing up the grill if my deck is standing in six inches of snow or being lashed by one of the November rainy windstorms that make late autumn in Seattle so delightful. But other than that, I cook from the randomly selected book, and make a recipe I've never tried before.

This week I drew Betty Crocker's Old-Fashioned Desserts, a 1992 cookbook I picked up from the bargain table at Border's in Philadelphia at some point in the early to mid '90s.  I've taken it with me on all my moves and often thought how lovely the illustrations are and how tasty the recipes sound, but never got around to cooking from it.  Today that changed when I made... 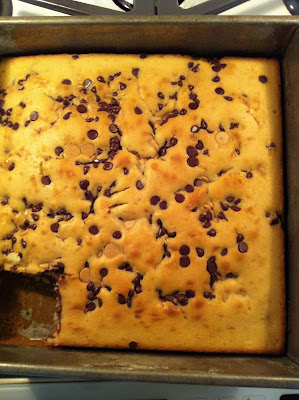 Bake 35 to 40 minutes or until toothpick inserted in center comes out clean; cool.

This is about as simple as a cake made from scratch* gets.  It's not very sweet, though that depends to some degree on the peanut butter, I'm sure--I used Adam's No-Stir, which has no added sugar. But at least as I made it, it's more of a breakfast bread or coffee cake than a standard dessert cake.  I wasn't blown away by it, but it's so straightforward I'd happily make it again, especially for one of our midweek work potlucks.

*My mom liked to tell the tale of how when I was 4 years old or so, she took me grocery shopping and I eagerly pointed out a cake mix box that showed yellow cake with chocolate icing, my favorite childhood dessert.

"Well, where's the scratch?" I replied, to the amusement of everyone shopping that aisle.
Posted by Susanna Fraser at 6:10 PM