As I mentioned before leaving for RWA, the cover for my November 5 release, An Infamous Marriage, was voted on by attendees at the conference's Carina spotlight.  And here it is! 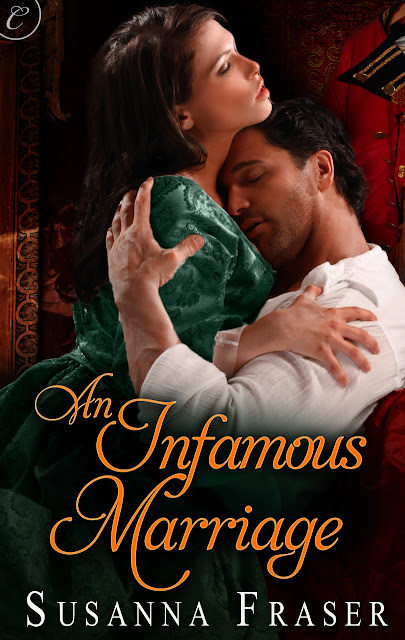 While I liked both options, this one was my favorite, so I'm happy with how the vote turned out. You see, while the hero and heroine aren't exactly the way I picture them in my head--that will never happen, I'm sure--they're close.  The heroine has straight hair, which is somewhat harped on in the book, since like her author Elizabeth has serious curl envy. Though her dress is more of a Georgian cut than a Regency, she does wear green a lot, and Jack's uniform coat that you can see hanging in the background looks pretty much right for an early 19th century British officer.

And aside from details of costume and appearance that, let's face it, matter way more to me than to most readers, it's just a lovely, romantic image.  While Jack and Elizabeth bicker more and in some ways have a more contentious relationship than either Will and Anna from The Sergeant's Lady or James and Lucy from A Marriage of Inconvenience, they are passionate about each other. And I think the juxtaposition of the intense embrace with a title that makes it obvious all is not rosy for our pair works well.

Posted by Susanna Fraser at 6:00 AM