A friend on my personal Facebook page suggested that the problem with my Pork Wellingtons was that I was over-rolling the puff pastry to get one sheet to fit around the tenderloin.  So this time around I used one whole sheet with enough of a second trimmed to fit, no rolling, and it turned out PERFECT.  Quite possibly the best thing I've ever cooked.

And the timing was perfect, too, since I served it at my first annual Waterloo Dinner on Saturday night. Now, I suppose you could do a Waterloo dinner with authentic 1815 foods, and I'd love to attempt such a meal someday...but I went with a Wellington as the main course and a Napoleon (aka a mille-feuille) for dessert, because, really, why wouldn't I?  As a wholly American, wholly non-aristocratic person hosting a Waterloo party, I've got to have my tongue somewhere in my cheek during this process.

Anyway, if the Wellington was the best thing I've ever cooked, the Napoleon was the best dessert I've ever bought and served.  (I was going to say the best thing until I decided that's still the time I had barbecue from Dreamland flown in for a housewarming/first book sale party, because if you can't splurge after buying your first house and selling your first book, when can you?)  The Napoleon came from Le Fournil, which is up there on my Seattle recommendations list with Tilth and Serious Pie.

I didn't get any pictures of the Wellington, but here's the Napoleon, accompanied by my desk toy/writing mascot Duke of Wellington: 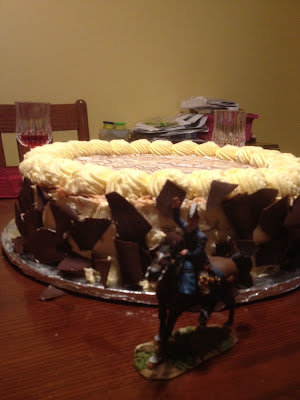 The chocolate curls on the side got a little messed up in transit from the bakery, but I think you can still tell that's an awesome cake.

I plan to continue this dinner in future years.  We were even riffing on the idea of a Waterloo seder, complete with questions like, "Why is this night different from any other night? On all other nights we eat our meat plain or lightly sauced. On this night why do we wrap it in puff pastry?"  Halfway through we'd send someone to the door to look for Blucher and the Prussian army, and Mr. Fraser thinks we should close with a particularly solemn rendition of this song.
Posted by Susanna Fraser at 10:11 PM