Last week's cookbook drawing gave me McCall's Best One-Dish Meals, a 1994 cookbook ("McCall's reinvents one-dish meals for the '90s!") credited to the editors of that magazine. (Which I just learned through the powers of Google and Wikipedia is now extinct, having been briefly owned by Rosie O'Donnell before ceasing publication 10 years ago.)

Busy author/mom/day-jobbed grant analyst that I am, I'm all about the one-dish meals. Anything quick and convenient that's still reasonably healthy and tasty is a blessing. Despite that, I've rarely turned to this cookbook--I don't even remember how I got it--but I was game to try and chose recipes for two meals. 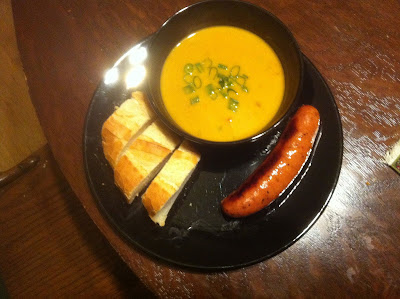 1) If using fresh pumpkin or squash, roast at 350F until soft. When cool enough to handle, scoop flesh into a bowl.

2) In a Dutch oven, melt the butter over medium heat. Add the onion, saute for 15 min or until golden brown. Add the pumpkin, red pepper, jalapeno, and chicken broth. Heat to boiling. Cover; reduce the heat to low. Simmer 10 min, stirring occasionally. Remove all but 2 c. of the soup solids to a food processor. Puree in batches. Pour the puree into the reserved soup in the pot. Add the peanut butter and heavy cream. Over low heat, cook, stirring, until the peanut butter melts. Add the lime juice, salt, and pepper. Sprinkle each serving with green onion.

I made this as a weekend dinner, accompanied by warm French bread and andouille sausage, and I thought it was tasty. To me, the hint of peanut butter and the brightness of the lime juice made the flavor pop. Mr. Fraser, however, thought it far too peanutty, and the very finicky Miss Fraser took one bite and turned up her nose. So I probably won't make it again, especially considering that when something is advertised as a one-dish meal, I don't expect the sink and counter to look like this when I'm done: 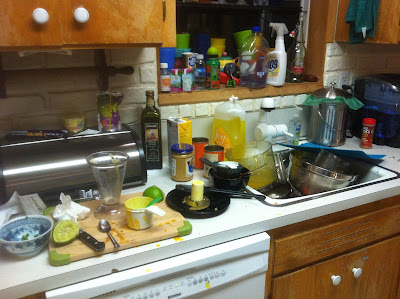 Granted, the sink wasn't 100% empty when I started--I think there was a frying pan from the previous night that hadn't fit into the dishwasher, plus a coffee cup or two. Still, that's without the actual soup pot, which was still on the stove when I took the picture.

Later in the week I tried chicken hash:

1) Place potatoes in a medium saucepan with enough water to cover. Add 1 t. salt. Bring to a boil. Reduce heat, cover, and simmer 4-5 min or until the potatoes are cooked through but not mushy. Drain the potatoes and rinse under cold running water until thoroughly cooled. Drain well.

2) In a cup, combine the remaining salt, the rosemary, and the ground pepper. Stir until blended, set aside.

3) In a 12-in cast iron skillet (or just a regular skillet, which I used with good results) over medium-high heat, melt 2 T butter. Add onion and red pepper and saute 5 min or until tender. With a slotted spoon, transfer vegetables to a bowl. Add 1 T butter to skillet. Over med-high heat, when the butter is foaming, add the chicken and half of the herb mixture. Cook about 2 min, turning the chicken only a few times. Transfer chicken to bowl with vegetables. Add remaining butter and olive oil to skillet. When the butter is foaming, add the potatoes and remaining herb mixture to skillet. Cook 6-8 min or until potatoes begin to brown, turning the potatoes twice during the cooking time.

4) Add the chicken-vegetable mixture to the potatoes in the skillet. Toss until well mixed. Lightly pat down the hash. Pour the heavy cream around the edges of the skillet and over the center of the hash. Cook for 5 minutes, turning the hash occasionally, until it is crusty.

Again Mr. Fraser and I had a difference of opinion. I thought it was delicious, in a soothing homy, salty, buttery sort of way, while he gave it a "meh." That said, I'll probably make it again, because it's quick and simple, more so than the recipe makes it sound.
Posted by Susanna Fraser at 8:15 PM