Some part of me still thinks I should put dinner on the table the way my mother always did. Not the same food. She was a product of her time and place, which meant she could bake like nobody's business but cooked vegetables until they were dead and--I still don't get this one--not only was she willing to eat instant mashed potatoes, she actually thought they tasted BETTER than the real thing.

But she cooked every night. And aside from that baffling fondness for instant mashed potatoes and the like, she didn't use a lot of convenience foods to get dinner on the table. She roasted beef, fried pork chops, stewed chicken and dumplings. She always had two or three vegetable side dishes, and at least once a week she made a homemade dessert.

She had time for this because she was a stay-at-home mom. I am not. I have a full-time job, plus all the hours I spend trying to build my writing career. Yet still I feel guilty for prepping spaghetti & (frozen) meatballs and (jarred) sauce with a bagged salad on the side, whipping up grilled cheese and opening a can of tomato soup, or just ordering a pizza.

Gradually I've realized that's silly. I'm busy. Those quick weeknight meals may not be nutritionally ideal, but most of them aren't all that bad. But I do love to cook, and I wish I got more use out of my cookbook shelf. I think I've got as many cookbooks as I do books on Wellington, Napoleon, and both their armies...which given my research book addiction is saying something. So I decided to make Saturdays my Real Cooking Days, the one day I'll spend hours in the kitchen and regularly try new recipes.

Here are this weekend's results:

I went to the University District Farmers Market Saturday morning. I resisted my usual urge to stock up for the whole week, which inevitably leads to beautiful produce going bad in my fridge when it turns out I actually don't feel like doing something with those collard greens on Wednesday evening. Instead I stuck to what I could use that day, including the bread, tomatoes, and basil... 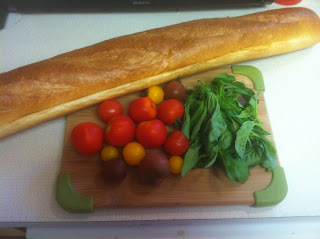 ...that formed the basis for this bruschetta (assisted by garlic, olive oil, and balsamic vinegar): 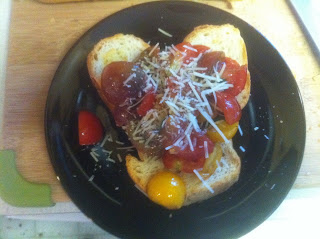 Then I finally made a recipe from Pig: King of the Southern Table, one of the cookbooks I got for Christmas this year. I chose a recipe for braised pork chops with port gravy since it looked pretty straightforward and was entirely a stovetop dish. I didn't want to run the oven much, since it was a warmish day and our kitchen has no AC. (This is Seattle. Most houses don't have AC--we're ahead of the game with a tiny window unit in the bedroom--and "warmish day" = 80F or so.) Here's how it looked, with a side of couscous: 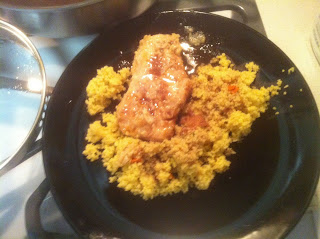 It was, unfortunately, a bit bland, and the pork chops were dry despite my following the recipe pretty exactly and testing for doneness at the earliest suggested time. But the gravy was good, so I might try again, with thinner chops, triple the rosemary in the breading, and a far shorter cooking time.

Last but not least, I improvised a dessert out of french toast made from chocolate bread from the farmers market topped with sweetened blackberries and blueberries (they're the early end of the crop & were too tart to eat without sugar), and whipped cream. (Yes, whipped cream from a can, which is probably just as appalling as my mom's instant mashed potatoes, but we all have our shortcuts. Now you know one of mine.) 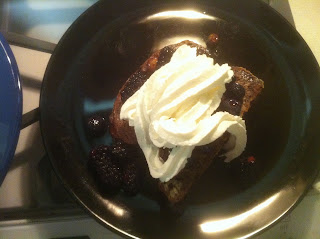 This was much the best of the meal to me. A little too breakfasty for dessert, but delicious all the same, and so simple to make.
Posted by Susanna Fraser at 7:00 AM