I'm delighted to report that Carina is acquiring my next book. Title and release date remain TBD, but it's a historical romance with a (fictional) British general for a hero. The hero and heroine, Jack and Elizabeth, marry in 1804 to fulfill a deathbed promise and are soon separated by the demands of his military career. By the time they're reunited in early 1815, they've accumulated a long list of grievances against each other and wish they'd never married. Just as they're beginning to make their own peace, Jack is called back to war when Napoleon returns to power--only this time Elizabeth has no intention of remaining quietly behind in England. 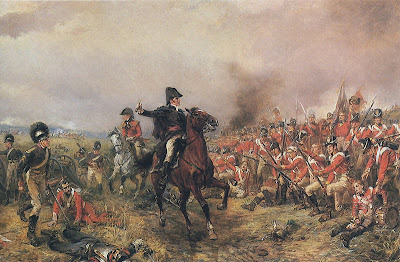 In other words, I'm writing a Waterloo story. I think every Regency writer, at least those of us with even the tiniest degree of interest in the military side of the era, has one in her, and this is mine. Or possibly just my first.

The book will probably come out in late 2012. I wish I wasn't looking at such a long gap between releases, but my pinched nerve slowed me down a lot for six months or so. Now, well, to use the cliche, it is what it is. Assuming the date holds, at least I won't have a calendar year without a release in it.
Posted by Susanna Fraser at 10:30 AM