I'm continuing my endeavor to read three books per week as part of the Seattle Public Library's adult summer reading program. Here's the last two weeks' worth. On the one hand, I didn't have a lot of reading time at RWA. But SEA-NYC is a long flight, so I got some serious airplane reading in.

This is the latest entry in one of my favorite mystery series that no one knows about. They're set in early 20th century Oklahoma, with Alafair Tucker, housewife and mother of ten, as amateur sleuth with an occasional assist from her husband and older children. They're rich with local color and historical detail, and the first book in the series, The Old Buzzard Had it Coming, is available for the Kindle at IMO a reasonable price.

McClure, who is my age or maybe a few years younger, like me spent a part of her childhood obsessed with the Little House series--the books, not the TV show. Her memoir explores what the series meant to her, reflects on Laura Ingalls Wilder's real life vs. its fictionalized depiction, and takes us with her as she visits Ingalls and Wilder home sites.

Originally published as a Signet Regency in 2000, this book is now available electronically through Belgrave House. May I just say one of the best things about the e-book revolution is being able not only to buy older, out-of-paper-print books easily and at a reasonable price, but to do so in such a way that the author receives royalties for it? This is a straightforward, sweet, but not entirely chaste Regency about the early days of a marriage of convenience.

A mostly sympathetic portrayal of an assortment of contemporary American nuns. (Ever since I read In This House of Brede, I've been more interested in nuns than your average married Protestant romance novelist.)

(Yes, I read those two back-to-back because it amused me to read two such different Unveileds in a row. I am easily amused, sometimes.)

Best historical romance I've read this year, poignant and character-driven. Perhaps the most wonderful thing about it, in my opinion, is that once the hero and heroine start trusting each other, they don't stop, despite many opportunities where a lesser writer could've used a Big Misunderstanding to drive them apart. 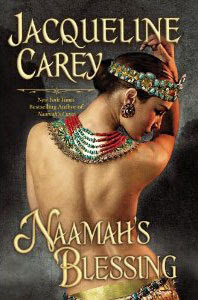 I've been hooked on the Kushiel's Legacy series since it began with Kushiel's Dart, and this book provided a fitting close to Moirin's trilogy (though not a good place to start if you're new to the series--you should begin at the beginning). I'm fond of alternative histories, and I enjoyed Carey's take on the Aztec and Incan cultures and their early encounters with Europeans. Though I also noticed George RR Martin's books have changed my expectations of fantasy. I kept expecting these two characters who turned out to be perfectly loyal friends and companions to Moirin and Bao to betray them and their mission at any moment.

I hope Carey returns to Terre d'Ange and its world someday, but I can understand her needing a break after nine epic novels. I'd love to see her take the stories yet further forward in time, though with the, um, technological constraints she had Moirin impose upon her version of the world I suppose she couldn't exactly have a d'Angeline Napoleon, though I with my historical biases think it would be AWESOME.

Doesn't Carey get the best covers? I included hers in this post just so I could look at the pretty some more.
Posted by Susanna Fraser at 7:00 AM