The Battle of Waterloo was 196 years ago today. As a Regency romance author who prefers to write about soldiers and also something of a military history geek, I think I'm contractually obligated to post something about the battle.

Four years from now, I plan to actually be there on the field for the 200th anniversary. I've got a decent-sized chunk of money set aside in a CD where I won't be tempted to touch it before it's time to book plane tickets, and I'm hoping to take 3-4 weeks off work and make a leisurely trip of it. 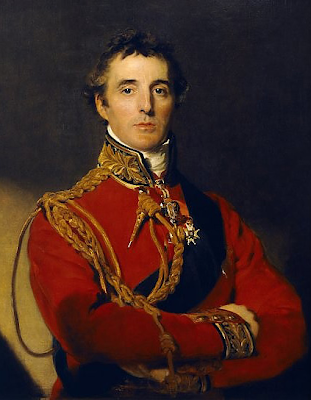 My new WIP is partially set at Waterloo, so I've been re-reading some of my sources. Today I was reminded by John Keegan in The Mask of Command that from the time Wellington woke up on June 15 (the day the French army crossed into Belgium) and when he fell asleep on the floor in his headquarters after Waterloo (having given his bed up to a dying officer), he got about 9 hours of sleep. Total. In three nights. Knowing that, I'm even more amazed and impressed with how well he and his army performed. On that little sleep, I'd have trouble framing a coherent sentence, and I'd probably botch the whole battle doing whatever is the military equivalent of getting a bowl of cereal, but putting the cereal box away in the fridge and the milk carton on the pantry shelf.
Posted by Susanna Fraser at 7:00 AM