My second novel, A Marriage of Inconvenience, is now available for preorder in the Kindle Store at Amazon! So if that's your preferred e-reading format, follow the clicky link, place your order, and the book will be waiting for you bright and early on the morning of April 11.

The book will of course also be available directly from Carina Press, not to mention Barnes & Noble, the Sony ReaderStore, the Google eBookstore, etc.--pretty much wherever ebooks are sold. But for some reason Amazon is consistently quickest off the mark getting books up for preorder. And since the moment the book is actually available for sale somewhere is the moment it feels real, crossing that Amazon threshold is a Big Deal to me.

In order to further motivate you to Buy My Book (if I can't shamelessly self-promote on my own blog once in awhile, where can I?), here's my lovely cover along with an excerpt from the novel: 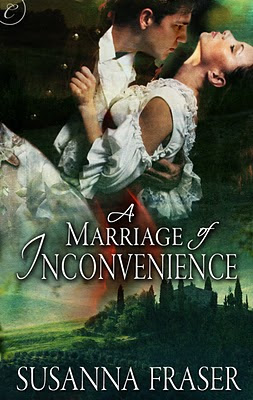 James knew quite well that he had merely had the wind knocked out of him, and that the young woman leaning over him was therefore no celestial being. Also, angels were generally represented as fair creatures, golden of hair and garbed in heavenly blue. Nothing angelic about deep brown eyes that fairly crackled with intelligence behind their momentary anxiety, nor about those dark curls peeping from beneath a scarlet cloak.

Yet for all that, the girl was an angel. He smiled lazily at her.

Her brows drew together slightly, which only served to further highlight her deep-set, expressive eyes.

Her voice was clear and melodious. Angelic, even.

“Nothing worse than bruises, I trust, miss,” he assured her.

“Do you think you can rise?”

The angel could not possibly realize she had committed a double entendre. Sweet-faced and innocent, she was no older than Anna and likely a little younger. She spoke in the soft, cultured tones of a gentlewoman.

But he allowed himself an inward smile nonetheless. “I trust I can,” he said, pushing himself up to a sitting position with a slight wince. He had landed on his left shoulder, and it pained him when he moved.

She rocked back on her heels to maintain a correct distance between them, and the hood of her cloak fell back to reveal all her thick brown hair, which James knew must have begun the morning neatly coiled but was now wind-tossed.

He blinked at her. “Whatever for?”

“I startled your horse.”

“Not deliberately, I trust, unless you have the power to summon the wind.”

Her lips twitched as though she wanted to smile but was uncertain of the propriety of such a course. “No, sir.”

“Well, then. You’ve no need to apologize. I’ve but a trifling pain in my shoulder, nothing more.” He glanced over the offending shoulder and spotted Ghost galloping down the valley, with Anna on Shade in close pursuit. “Ghost is uninjured as well, and giving my sister a chance to exhibit what a master equestrienne she is.”

The angel’s voice was wistful, and James turned to look at her again. “Are you a horsewoman, miss?”

“I never had the opportunity to learn.”

He studied her more closely. Her simple dress and cloak were well made, but without the fashionable line and elegance that marked the work of an expensive London modiste. She must come of family genteel enough to see its daughters educated, but not wealthy enough to keep a stable. She couldn’t be Lord Almont’s intended, as he had first suspected, and he rejoiced that this pretty innocent wasn’t to be the bride of a foolish lord almost old enough to be her grandfather.