Random Cookbook of the Week - Ad Hoc at Home

Last week's cookbook draw was Thomas Keller's Ad Hoc at Home, which is exactly the kind of cookbook you'd expect as a home cooking cookbook from a chef of Keller's level--i.e. a reasonably skilled and experienced home cook like me can make most of the recipes, but they're more labor-intensive and challenging than I have energy for on an ordinary weekday when I've already put in a full day at the day job and I still need to squeeze in an hour or two's writing time while also helping my daughter with her homework, packing her and my lunches for tomorrow, and hopefully at least having a conversation or two with my equally busy husband.

Still, it's a good cookbook, and the Potato Hash with Bacon and Melted Onions I made the last time it came up in my rotation is one of the most delicious things I've ever produced. Last week's effort didn't turn out so well, but I figure that's more my fault than the recipe's. 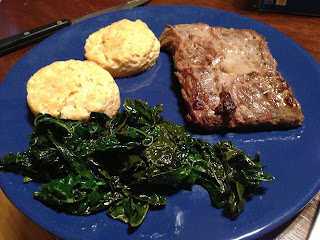 Combine the marinade ingredients in a medium saucepan and bring to a simmer over medium heat. Remove from the heat and let the marinade cool to room temperature.

Put steaks in dish or resealable plastic bag, add the marinade, and cover the dish or seal the bag. Marinate for at least four hours or up to a day in the refrigerator.

Remove the meat from the marinade and let sit at room temperature for about 30 minutes before cooking; discard the marinade. Dry the meat with paper towels. Season with salt and pepper.

Heat some canola oil in a large frying pan over high heat. When it shimmers, add half the meat and quickly brown the first side. Turn the meat and, working quickly, add 1 T of the butter, 2 thyme sprigs, and 1 garlic clove and brown the meat on the second side, basting constantly; the entire cooking process should only take about 1 1/2 minutes. Transfer the meat to the rack and spoon the butter, garlic, and thyme over the top. Wipe the pan and repeat with the remaining steaks.

Transfer the baking sheet to the oven and cook for 8-10 minutes, or until the center of the meat registers about 125 F. Remove from the oven and let rest on the rack in a warm place for about 10 minutes for medium rare.

I think I erred in trusting the time in the recipe over my own instincts for when the steak was sufficiently seared. I think if I'd let it go 30-60 seconds longer, it would've gotten a nice char to go with just barely medium rare innards. (I do like my steaks on the bloody side.) As it was, it was a bit too mushy and soft altogether. That said, the marinade imparted a nice subtle but distinctive flavor.

I also tried the book's buttermilk biscuits recipe. I won't post it here, but suffice it to say I still haven't quite got the hang of biscuits. These turned out a bit like hockey pucks, but I think even if Keller himself had made them they wouldn't be the elusive high, light, and fluffy Southern-style biscuits like my mom used to make. Once I achieve those, I'll post the recipe for sure...and I've just discovered you can order White Lily flour on Amazon! Maybe good biscuits are within my grasp after all, since I'm given to understand that the Yankeefied flour my local grocery store carries is too hard for a Southern biscuit.
Posted by Susanna Fraser at 11:54 AM