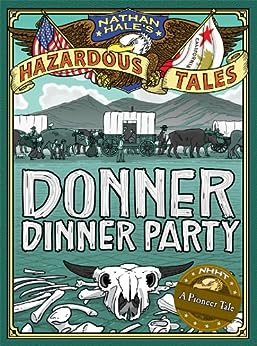 Miss Fraser and I are having a contest this summer to see who can read the most books from June 1 - Labor Day weekend. The winner gets an Amazon gift card. (Of course I'm not actually trying to beat my 9-year-old. I am trying to make sure she reads instead of spending the entire summer watching TV and playing video games by making the contest as close as possible.) Anyway, my husband, in his role as arbiter of the contest, has decreed that she gets to count this book toward her summer reading tally, but I don't, since it's a middle grade graphic novel. I read it as soon as Miss Fraser finished it anyway because these irreverent takes on famous incidents in American history are just so fun. Of course, any book about the Donner Party is going to be awfully grim in spots. Hale's snarky take actually pulled far fewer punches than the earnest novelization of the same events I read back when I was 9 or 10.

If you've got a middle grade child, I can't recommend the Hazardous Tales series highly enough. My daughter, though smart and geeky, isn't particularly interested in history, but she eats them up. I just wish there was a similar series on European history so I could get her interested in the stuff I write!

(The author really is named Nathan Hale, and the historical Nathan Hale narrates the series--he sees into his future through a Scheherezade plot device wherein as he's about to be hanged he's "taken up into history" and is therefore able to tell stories from America's future to delay his execution. You can read all about it at the series blog, and have I mentioned how awesome these are? Don't have your own middle-grade child? Get the series for your friends' kids, for your nieces and nephews, or to donate to your local library. Or just read them yourself.)

A detailed account of the Battle of Borodino framed by a brief summary of Napoleon's Russian campaign as a whole. I learned little I didn't already know, since I've been reading detailed accounts of the campaign, but I expect I'll refer to this book a lot once I settle into writing my manuscript that's set in Moscow and on the retreat for the sake of the maps, timelines, illustrations, and summary bios of important people on both sides.

81) From Father to Son, by Janice Kay Johnson.

Posted by Susanna Fraser at 6:00 AM