As promised, this week I cooked from Chili Madness (Second Edition).

I settled on one of the simpler and less classic recipes in the book for two reasons: 1) Normally I do my random cookbook recipe on Saturday, when I have the most unscheduled time. But this week Mr. Fraser took me to Agrodolce, Maria Hines' new restaurant, on Saturday night, so I was cooking on Sunday when I'm a little busier. 2) Since Mr. Fraser is from Oklahoma and is as opinionated about chili as I am about barbecue (pork is the only proper meat, and I like a red sauce, but a thin, tangy one like from Dreamland rather than the cloyingly sweet ketchupy monstrosities that pass for sauce in most of the country--and we won't even TALK about the people who call a cookout with hamburgers and hot dogs "a barbecue"), I wanted something so far removed from his family's standard that it wouldn't make sense to compare them. Kinda like how I can appreciate a good South Carolina-style mustard sauce on pulled pork.

Melt the bacon drippings or butter in a large pot over medium heat. Add the onion and cook until it is translucent, about 5 minutes.

Add the garlic and chicken and cook, stirring, until the chicken begins to brown, about 4 minutes.

Add the broth, green chiles, and potato to the pot. Simmer until the chicken is cooked through and the potatoes can be pierced with a fork, 30-40 minutes.

Taste the chili and adjust the seasonings as needed, adding salt to taste. Spoon the chili into individual bowls, and scatter the blue cheese over the top of each serving. 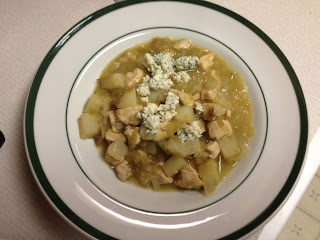 Not the most attractive dish ever, is it? And it tasted fairly meh, too. Maybe it would've been better with fresh chiles. As is, the Gorgonzola kind of overwhelmed the rest of the flavors. I do like the trick about reducing chicken broth by half to make it thicker and more flavorful, though.
Posted by Susanna Fraser at 10:18 PM