Catching up on 52 Cookbooks: #27, Lobscouse and Spotted Dog

If I ever have time (i.e. if I'm fortunate enough to reach a point where I don't need a full-time day job on top of my writing career), I mean to take up historical reenacting.  I always seek out living history museums, and any chance to experience the food, drink, music, clothing, etc. that people from the past, particularly my own characters, might've enjoyed.

I love the dedicated geekery that leads to blogs like Inn at the Crossroads (medieval and modern recipes based on the cuisine of A Song of Ice and Fire, source material for Game of Thrones), and Outlander Kitchen (same thing for Diana Gabaldon's books).

So naturally I own Lobscouse and Spotted Dog: Which It's a Gastronomic Companion to the Aubrey/Maturin Novels.  But until this project I never actually cooked from it, and its home isn't with my cookbooks in the kitchen but on the research bookshelf in my office.  I grab it sometimes when I need a suitably historical/British dish for my characters to feast upon.  None of my other cookbooks talk about drowned babies or spotted dogs, after all.  (They're puddings, the old-fashioned boiled kind with lots of dried fruit.  I don't see the appeal, but, then, I'm the type who replaces raisins with chocolate chips whenever I make quickbreads or oatmeal cookies.  Doubtless my taste buds would've been different had I been born 200 years earlier.)

I wish I hadn't been neck-deep in edits when this came up in the rotation, because I'd love to try Strasburg Pie (bacon & foie gras baked in puff pastry), Ratafia Biscuits, or a Jam Roly-Poly, just to name a few, but I didn't have the time to source ingredients unavailable from Amazon Fresh or my local grocery or to devote most of a weekend afternoon to cooking.  So instead I went simple, but a simple dish Jack and Stephen ate all the time: 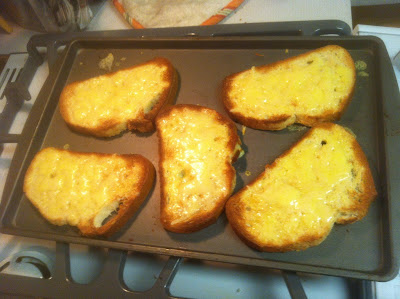 Yes, I made toasted cheese.  Simple as can be--I've heard it described as a simplified Welsh rabbit, but I thought of it as an open-faced grilled cheese.  You take bread, whatever kind is handy, along with cheese, whatever kind is handy.  I used Italian bread with a mix of cheddar and parmesan--the good stuff, imported-from-Europe foodie cheddar and parmesan, since I figure that's closer to what Jack and Stephen would've had.  You toast the bread a bit, then add the cheese and broil.  That's all there is to it.

Simple as can be, and gives you a sense of connection to the past.  I might prefer a chocolate cake to a drowned baby and pork tenderloin to soused hog's face, but bread and cheese are timeless.
Posted by Susanna Fraser at 9:24 PM