Just a quick post to catch up on the last two weeks of 52 Cookbooks:

The week before last I drew The New Covent Garden Soup Company's Book of Soups, a cookbook Mr. Fraser bought the year we lived in England (we met there, started dating within a month or two, and got married a year after returning to the States and nearly two years to the day after we met). To get into the proper spirit of the thing, I made their vegetable stock despite certain oddities of ingredient. (Lettuce? Cooked? In a stock? Really?) And I'm glad I did. It gave the resulting soups a freshness and lightness you just don't get with canned stock.

I first made Cheese Soup with Crispy Bacon, which was every bit as yummy as it sounds, but nowhere near as heavy: 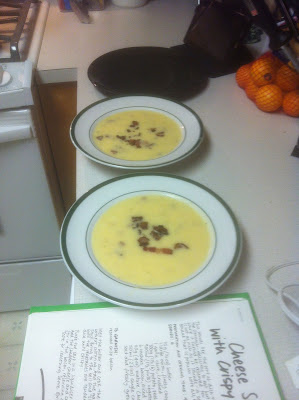 Since I had plenty of stock left over, I made their herbed cream of chicken soup and served it alongside a pesto bread recipe (bruschetta, basically) from my Week 9 cookbook, Starters and Closers, the Mariners' wives charity fundraiser cookbook from the 2001 season--i.e. back when we had a really good team. (Though that 116-win season is a lot less glorious in retrospect, since we weren't able to follow it up with a championship and have been wallowing in futility since 2004. But I digress.) Anyway, I decided to make one "starter"--the appetizer pesto bread--and one "closer"--Mike Cameron's contribution to the dessert section, cinnamon-dipped marshmallows baked inside crescent rolls. I thought they were kinda gross, but my husband and daughter ate them all. 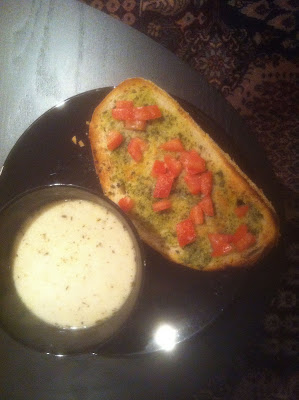