This week's cookbook is also nostalgia, albeit of a different kind than my recent culinary visit to Alabama. My random draw gave me The Route 66 Cookbook, by Marian Clark. It's an homage to the diners of yesteryear, giving a chapter per state's worth of stories and recipes from restaurants lining the route.

Lots of chili, barbecue, and pie...so I made pasta from the California chapter. My excuse is that I was at ECWC all last weekend, so I had to do my cooking blog recipe on a weeknight. I needed something I could do quickly, and nothing is more in my culinary wheelhouse than pasta with a homemade sauce. So last night I whipped up Loews Santa Monica Beach Hotel Penne Pasta in Spicy Sausage Paprika Sauce: 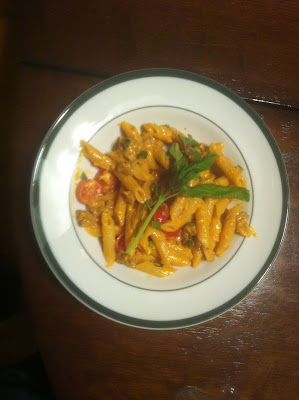 Tasty stuff, spicy from the sausage and paprika and bright from the fresh tomatoes, green onions, basil, and oregano, but SO rich. It has a cup of heavy cream, plus an entire 6 oz. carton of fresh Parmesan cheese. I might make it again someday, but given that our doctor has given both me and Mr Fraser recent Talks on how people with our familial cardiac risk factors ought to be eating, I don't think it's going to become a staple.
Posted by Susanna Fraser at 7:00 AM