Back in July, I posted my Desert Isle Movies List and promised to eventually post about why each one is a favorite.

This week I'm going to tackle Dave (1993, Kevin Kline/Sigourney Weaver), since it's a frothy political romantic comedy and therefore a fun distraction from midterm elections, which are NOT frothy and fun. 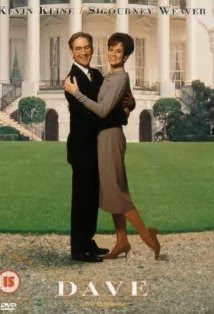 If you haven't seen the movie, here's a brief synopsis: Dave, an affable, good-hearted DC temp agency owner, happens to bear a startling resemblance to a sleazy, philandering president. When the POTUS suffers a stroke, Dave is persuaded to stand in for him by the powers behind the throne...but when he sees how corrupt those powers are, he starts to seize the reins of power himself. Oh, and fall in love with the First Lady.

It's goofy and unbelievable. And I don't really buy into the idea that any average nice American would make a good president--it's an almost impossibly difficult job, and when I'm filling out my ballot or arguing for my choice at my party's caucus, I'm not thinking about which candidate I'd like to have a beer with or which one I'd rather have babysit my kid. I want, in no particular order, brains, toughness, pragmatism, and someone who broadly speaking shares my view of the world. But Dave isn't about all that, it's just one of the most charming romantic comedies I've ever seen.

So, if you're American, vote tomorrow. Or mail in your ballot, as the case may be. Washington is a vote-by-mail state, so I voted two weeks ago and am heartily sick of having to endure all the campaign ads anyway. And if you want a break from the depressing, cynicism-inducing side of the political process, rent Dave.
Posted by Susanna Fraser at 7:00 AM