One of the story ideas I'm toying with attempting in the near- to medium-term future is a romance set around the Battle of Waterloo. You see, Waterloo is endlessly fascinating to me. I've got at least six books on the great battle packed away in boxes waiting for me to finish getting my new office ready, not to mention any number of biographies of Wellington and a few of Napoleon, too. 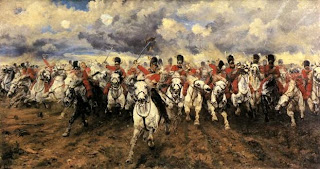 I never get tired of reading new accounts of Waterloo. If they're well-written, I read them with the same breathless, sleepless attention I give to the most page-turning and suspenseful of popular fiction, as if this time the British squares won't hold, the Guard won't falter, and the Prussians won't show up. So when browsing a newsstand the other day, I picked up a copy of a magazine I'd never tried before, Armchair General, whose June issue had the Scots Greys charging across the cover and the tantalizing headline of "Sun Tzu's Waterloo."

That's a different approach, thought I, and picked up the magazine, curious to see how the author had analyzed the battle from the perspective of a famous expert from another time and place.

Turns out people who've read as many books on Waterloo as I have probably shouldn't bother with magazine articles. The author concluded that Sun Tzu would've thought Napoleon's tactics extremely flawed on the day, and that though Wellington made some minor mistakes he'd chosen his position very well and defended it ably. Well, yeah. (And yes, there was more to it than that, but I didn't come away feeling I'd learned anything new or had my mind changed.)

The reason I'm blogging about this minor incident is that the article author stated with confidence that while Napoleon might've read Sun Tzu's Art of War, since there was a French translation available, Wellington most certainly had not, because no English translation existed in his lifetime. 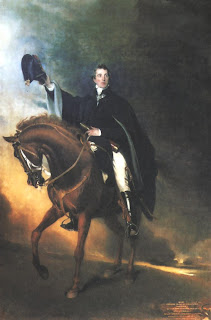 Thing is, there's a slight problem with that logic that I as a Duke of Wellington fangirl spotted immediately: Wellington was fluent in French. Now, I have no reason to believe he ever read Sun Tzu, but as an aristocratic Englishman who was involved in international diplomacy (including a stint as ambassador to France), he wouldn't have needed to wait for an English translation.

Moral of the story? Don't trust everything you read.
Posted by Susanna Fraser at 7:00 AM